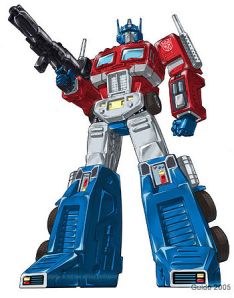 I’m pretty sure you’ve guessed today’s topic from the title.  Why, in almost every television series, book series, and comic line, does Optimus Prime have to die at least once?  There is no real reason that I can see for making this a tradition in the genre; it is unnecessary in the extreme.

To make room for new toys, in the 1986 animated movie Transformers: The Movie, Hasbro killed Optimus Prime despite his great popularity.  They came to rue this when children stopped watching the series and, to save sales, finally brought him back at the end of the series.  Since that time Optimus has been killed and revived, phoenix fashion, for at least twenty years.  He cannot die permanently (unless the series is ending) because of the possibility of another unprecedented fan revolt.

So why yo-yo him back and forth between life and death?  The first few times, and for new viewers or fans, it has the desirable effect of drawing them into the story.  But the rest of us react with either an eye roll or a deep sigh of, “Here we go again.”

Please, does this have to go on?  There has to be a better way of selling more toy models of his ‘upgraded’ forms than killing Optimus Prime and bringing him back.  It’s gotten more than a little tiresome to watch, and his death speeches are so recycled that they’re hardly prose anymore.

Don’t get me wrong.  I have no problem with Optimus narrowly surviving a near miss or getting severely injured and having to fight his way back onto his feet.  Being ‘dead’ for five minutes (instead of for an entire episode, line of stories, or a whole film) also works just fine, as it did in Transformers: Prime.  All characters get hurt, and Optimus is no less vulnerable than his soldiers, mentally or physically (though he may outlast many of them).  My issue is with his constantly leaving for the great beyond and then getting yanked back via crazier and crazier methods.

Are you listening, fellow writers at Marvel Comics?  That goes for you guys playing tug o’ war with your characters, too!

We’ve seen Optimus die enough.  The first time in Transformers: the Movie, later in various television shows, and finally coming full circle in Transformers: Revenge of the Fallen.  We get the point.  So does Optimus; he has more holes in him than a pincushion.

I think we could do with a rest, fellow writers.  Don’t you?