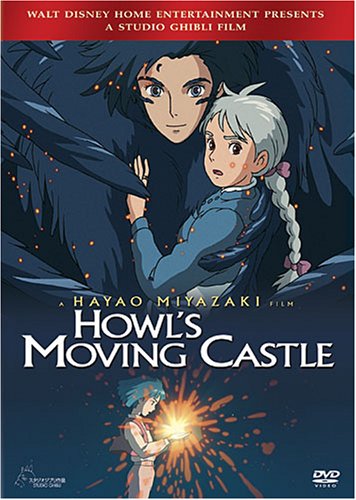 If you are familiar with the renowned Hayao Miyazaki film Howl’s Moving Castle, this blogger must warn you up front: Mr. Miyazaki diverged somewhat from Mrs. Jones’ story. Now, Mrs. Jones has no problem with that, the author of this post has no problem with that, and no one I know personally has a problem with this. But some people somewhere are bound to prefer either the book or the movie over the other. And in this case, that is a real shame, because both film and novel are about equal in terms of storytelling power and prowess.

Besides which, if you want to better understand the film’s plot, Mrs. Jones’ book is the best place to find information on the world of Howl’s Moving Castle. In the film, we see that Sophie is running her father’s hat shop, her mother is shallow and into the latest fashions, and Sophie is continually passed over because she is not as pretty as her younger sister, Lettie.

In the book, the very first thing we learn is that the country where Sophie Hatter and her family live is called Ingary. Second, the mother we see in the film should actually be Sophie’s stepmother. Her mother in the books died when she was two and Lettie was one; so her father remarried a young woman who worked in his hat shop. This young woman was named Fanny. Fanny had a child not long after the marriage – another daughter – and her name is Martha. So there are actually three Hatter sisters in the book.

Another thing to remember about Ingary (other than it is a country where invisibility cloaks and seventeen league boots are real), is that the eldest of three in a family never has an interesting or prosperous future. Neither does the second child, though that one may do somewhat better than the oldest. No, it is the third of three who makes the mark on the world.

And speaking of witches, it turns out that the Witch of the Waste once terrorized the country of Ingary fifty years back. Rumor has it she has returned now to take her revenge on the king, and so no one is allowed to go out alone, especially at night.

To add to the trouble, the king’s wizard – Suliman – went out to deal with the Witch of the Waste. Unfortunately, it appears that his attempt got him killed.

And on top of all this, a great big floating castle is roaming around Sophie’s town of Market Chipping. At first the residents think it is the Witch’s castle. Then someone explains it is actually the residence of the Wizard Howl.

This is no improvement, however. Howl is said to suck the souls from the prettiest girls he meets. That or eat their hearts; the rumors vary. Either way, no one in Market Chipping wants to lose their daughters to either fate, and Sophie, Lettie, and Martha are warned to never go out alone or to have any dealings with Howl.

When Sophie finally gets away from the hat shop to see Lettie some months later, she happens to run into a very attractive young man at the May Day celebrations. She barely speaks to him, but even that is enough to anger the jealous Witch of the Waste!

And so Sophie’s adventure in the novel begins.

I enjoy the film and the book about equally. Mrs. Diana Wynne Jones is an excellent writer, and her books are full of fun. Howl’s Moving Castle has two sequels: Castle in the Air and House of Many Ways. I may get around to reviewing these in the future, or I may not. If you can find copies of these novels, though, I highly recommend them to you. They are hilarious!!