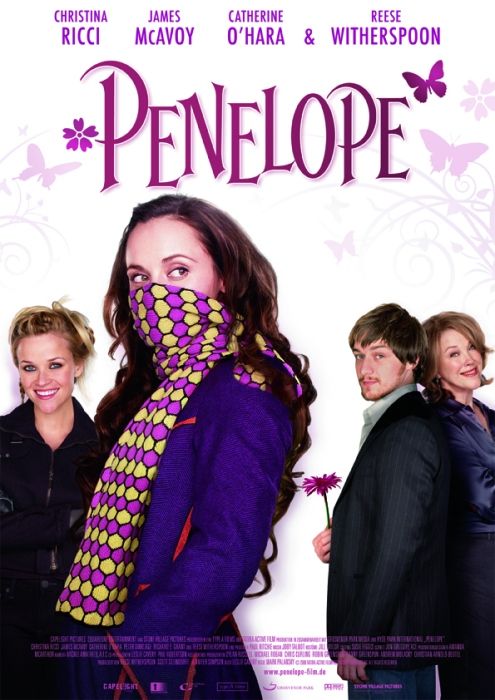 Last year at some point, a friend happened to turn on the tag end of the film Penelope. Though convinced to watch the next running of the show, I was less than enthusiastic about it. Too often films have a premise that sounds interesting, only to devolve into lectures on how we should despair, kick the bucket, or otherwise lie down and die. (Yeah, not my fictional forte, thank you very much.)

Anyway, I sat down to watch Penelope, and soon ate my thoughts about how bad this movie was going to be.

Penelope is a fairytale. It starts back in the nineteenth century, when the heir to a rich or “blue blood” family has a fling with one of the servants. She ends up pregnant and he declares to his family his intention to marry her. Well, the family “soon shows him how silly this idea” is and he marries a different woman, a rich heiress and fellow blue blood. Heartbroken, the serving girl kills herself and their baby. The young woman’s mother, a witch, curses the family in a bout of vengeful fury, promising that the first daughter born to this family of “blue bloods” will have the ears and nose of a pig.

No one really pays attention to the curse, mostly because the family line is passed down through the men after this happens. Then a perfectly normal, healthy girl is born in the family in about the 1940s. So much for that curse, right?

Eh, not exactly. Turns out the mother had an affair on the side, and so the girl was not actually related to her “father.”

Then we come to the modern day, when Penelope is born. She is, technically, the firstborn daughter in the family since it was hexed. And she has the ears and nose of a pig, just like the witch promised.

Both Penelope’s parents are upset by this turn of events, but her mother takes it far worse than her father. She goes to extremes to protect Penelope from the nosy press, blinding a reporter (played by Peter Dinklage) in one eye when he hides in the house and tries to snap a photo of her and her daughter. In order to put a stop to all the spying, Penelope’s mother fakes her daugher’s death, going so far as to cremate her coffin in order to make the swarm of reporters leave them alone. Far-fetched as this plan may seem, it actually works. The reporters disperse and the family becomes reclusive after their daughter’s “death.”

However, none of this eases the mother’s fears that someone will discover her daughter is still alive. So like Rapunzel in her tower, Penelope is raised inside her palatial house for the next twenty years or so. She is not even allowed on the mansion’s grounds; her mother has pictures in her windows of day and night skies complete with hillsides and flowers, so she can see something other than the backyard every morning and every evening. Penelope has never been outside the house for more than a few minutes during her entire life.

Penelope’s mother has placed all her bets on the promise of a cure for the curse; her daughter will have the nose and ears of a pig until a “blue blood” accepts her as one of their own – i.e., until a boy from “old money” marries her. To that end, her mother hires a professional matchmaker after training Penelope in all the arts of being a suitable bride from the time she can toddle.

When her daughter reaches marriageable age, suitors are called into an empty room with a mirror above the fireplace. This mirror is a one way window; Penelope stands on the other side and talks to the suitor, who cannot see through the mirror. After the beau of the day has finished proposing his undying love for her, Penelope leaves her secret room to talk to him directly.

Every one of her suitors runs off in fright when they see her pig nose (her hair hides her ears). They jump out of the second floor window or they run out the front door in an attempt to escape her. The family’s butler has to chase them down and drag them back to the house after this so they can sign a non-disclosure agreement, keeping Penelope’s secret. Then the whole process begins again the next day.

But one day the butler is not fast enough to catch an escaping suitor, who blabs about Penelope to the whole world. Everyone laughs at him, of course, except for Peter Dinklage’s reporter. He has never seen Penelope’s face, but he does not believe the story that she died and was cremated. He also holds a personal grudge against her mother for blinding him in one eye.

So with this suitor’s haphazard help, Dinklage hires the down-on-his-luck son of a “blue blood” (James McAvoy) to go see Penelope and secretly take a photo of her. What no one counts on, however, is the young man actually falling in love with her through their mirror conversations. 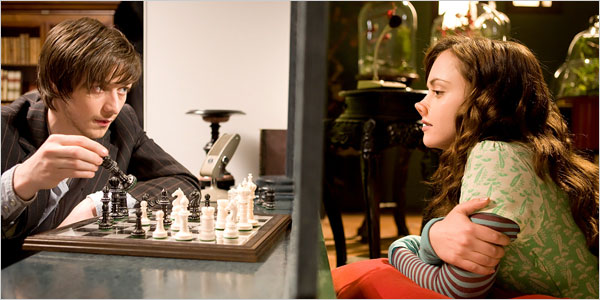 Penelope eventually leaves her secret room to see how he will react to her face-to-face. He does not run away like the others until he triggers the hidden camera on his person. But even that would not be enough to dissuade the smitten Penelope, proved when she begs him to marry her and lift the curse.

For a long, heartbreaking moment, her knight in shining armor stares at her. You can see he wants to say yes, that he does love her in spite of the curse. But something makes him say he cannot marry her, though it is obvious he really, truly wants to do so.

The rest of the story you will have to discover yourselves, readers. I have spoiled the first twenty to thirty minutes here already. Before I go I have to say that the acting in this film is superb. This has to be one of McAvoy’s best performances – better than his Mr. Tumnus in The Lion, the Witch, and The Wardrobe and far above his version of Professor X. (I say that because the X-Men movies are lousy, not as an attack on Mr. McAvoy.)

Most modern film fairytales are goofy and generally ruin or mock the genre. Penelope does not do that. It wears its fairytale label proudly, in my opinion, refusing to bow to the critics who try to make us think children’s stories are fluff and nonsense. It tells a great story which “kids from one to ninety-two” can enjoy and love. Even if romance films are not your thing, I think you ought to at least try Penelope. I did and, not only did I live to tell the tale, but I actually liked it and want to (someday) add it to my film collection.

Watch Penelope at your next opportunity, readers. It won’t kill you. ;P 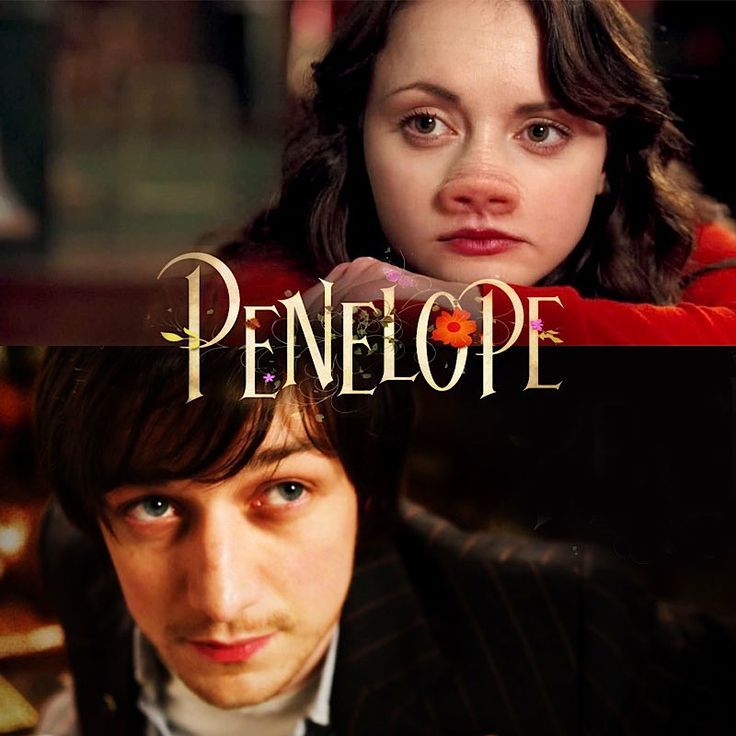 2 thoughts on “Penelope – A Review”