Earlier this year, I posted this Spotlight! article about a character from one of my favorite TV shows. The series in question was Thundercats, and the protagonist we were discussing was Panthro, who was never this blogger’s favorite character. He was much more impressive than I realized at the time, but he’s never been my preferred hero in that universe.

Today’s topic, however, was and remains my favorite character in the original series. This would be Cheetara, the only adult female Thundercat present for the first season of the show. Another adult female Cat, Pumyra, was added later on, but we will talk about her another time.

At first, I admired Cheetara mostly for her ability to run fast. She once hit 120 mph on a morning jog and, I believe, could run much faster in combat. Based on the cheetah, some time ago yours truly learned that this heroine’s personality was also centered on speed. Unlike Pietro Maximoff/Quicksilver and other characters who can run at fantastic velocities, though, Cheetara was a composed, calm humanoid cat woman. She lacked the fiery temper and/or juvenile attitude modern audiences often associate with people who run fast.

She had a sense of humor, though. It showed either in dry, witty comments or a smiling, “Right in front of you, [boys]!”, but this did not change the fact that she was the most ‘adult’ member of the Thundercats. The villains had to work really hard to rile her up, as did her teammates. Cheetara didn’t like being insulted any more than anyone else, but when she knew that someone was trying to bait her with derogatory comments, she shrugged the bad behavior or nasty remarks off. The male Thundercats tended to take such things more seriously, something that occasionally puzzled their female friend. She would become righteously angry if taunted by an enemy or when she saw an injustice committed, but otherwise she was very hard to ruffle.

This naturally meant that Cheetara rarely slipped into hysterics or dramatics. So if she grunted or stumbled with pain or surprise, the rest of the adult Cats converged on her faster than ants on a picnic. Cheetara didn’t have time or patience for theatrics, so any sign of distress from her automatically signaled an imminent problem of some kind. Thus she was the team’s barometer for trouble; if she reacted badly to something – even if it was something they couldn’t see – then the male Thundercats instinctively began looking for whatever problem was headed their way.

In addition to her amazing speed, Cheetara’s main weapon in battle was her retractable golden bo staff. Stored in a wrist guard on her left arm, the staff could be pulled free at any time and extend it to its full length easily. Combined with her incredible momentum, the staff enabled her to cause serious havoc in enemy ranks. Like the other Thundercats’ weapons, Cheetara’s staff was both magical and technological, meaning she could pull off some very neat tricks with it. She could lengthen the staff into a pole useful for vaulting over obstacles or springing up to high places. Or she could thrust the weapon to the earth, causing it to fire off several dozen “copies” of the staff that would fly out to strike and batter her opponents. It really was a nifty weapon, readers. 😉

Another power she had that was equally interesting, though sometimes it could be deadly. This power was Cheetara’s “sixth sense,” a limited form of telepathy that occasionally allowed her to feel and “see” when another Thundercat was in trouble. It was never shown enough to satisfy this viewer, but the writers made good use of in nonetheless.

Cheetara’s limited telepathy wasn’t something she could truly control or use in spectacular fashion for most of the show’s run. Generally, her latent psychic power flared up without her conscious will or effort. The one time Cheetara was able to use it as a genuine superpower came when the Lunataks – bizarre, evil creatures native to Third Earth – were using a device to scramble her psychic power in order to cover up one of their evil schemes. Overcoming their manipulation, Cheetara was able to free the captured Thundercats with a burst of telepathic power straight from her heart, mind, and body. It was the most stunning display of psychic strength she ever demonstrated.

With all this going for her, readers, it’s not hard to see why this blogger considered Cheetara her favorite character. Over time, her speed became less impressive than her personality, and to this day she has remained my preferred Thundercat. Given my unvarnished opinion of the 2011 remake for this series, though, it seems natural to assume that I didn’t like her appearance in the reboot. In actuality, with regard to Cheetara, the 2011 series gave me very little to complain about. In terms of personality, the new version was pretty close to the original conception of the character. What changes were made to her behavior were so minor that they’re not even worth consideration.

Nevertheless, I did have a few gripes with the 2011 presentation of the character, primarily with her outfit. In the original series, Cheetara’s suit covered everything but her right shoulder and arm. Now, that’s not exactly a smart fashion choice for a woman who intends to enter combat on a semi-regular basis, but the fact is that her original suit protected most of her body. Thundercats apparently needed little to no protective outerwear on their homeworld, Thundera, so it makes sense that Cheetara and the others would retain some measure of enhanced durability on Third Earth. This is the only reason (aside from the animators’/writers’ taste in fashion) that I can supply for Cheetara’s original, one-sleeved costume.

Her new suit in the 2011 reboot, however, has no such excuse. This costume was a ratty brown two piece with an exposed midriff and no boots. It was obviously meant to make the 2011 Cheetara look “cool” and “edgy,” a truly stupid move on the part of the new show’s writers. Even at her highest speed, wearing a get-up like that put her vital areas in serious jeopardy during a fight. More to the point, the original Cheetara would not have been caught dead in such a tattered uniform. She was never an “edgy” character in the original series and she didn’t need to be in the new one!

My other gripe was that the new writers for the show disposed of Cheetara’s latent “sixth sense.” That power had led to several interesting, thought-provoking episodes in the first Thundercats series, and it could have spiraled off in dozens of amazing directions during the new show. Some might argue that the affinity the new Cheetara showed for using Jaga’s magic was an homage to her dormant telepathy, but her “magic” powers were only demonstrated once in the reboot. To my mind, that’s hardly compensation for the loss of such an interesting trait, readers. 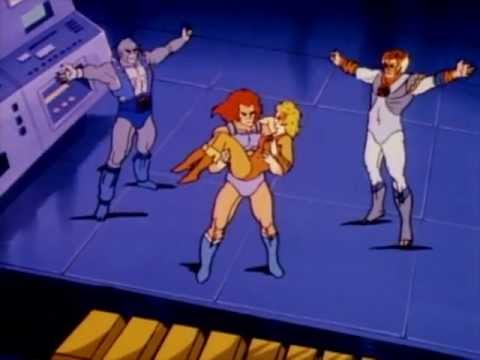 Despite these complaints, the 2011 series did improve on Cheetara’s portrayal in one regard. In the original series it was hinted that she and Tygra, a male Thundercat based on the tiger whom we will discuss later, were a couple. Other episodes, however, blurred the line and implied there was a mutual romantic interest between her and Lion-O, the ruler of the Thundercats. This could get confusing from time to time, especially since the series’ creators and subsequent merchandise made it plain Tygra and Cheetara were an item. Although I genuinely despise the books, the one good thing that the comics based on the series did was to show the two had married and had a couple of Kittens. It’s about the only thing I give the comics’ creators credit for doing.

Though the reboot writers led Lion-O to believe that Cheetara was romantically interested in him, they later demonstrated that she had an unequivocal romantic devotion to Tygra. Aside from the attempted love triangle, this was a really good move on their part. While the 2011 series didn’t treat the two as well as it should have, it at least made their mutual attraction clear, allowing them to show their love for one another and to act on it. For that, the new show deserves some points.

Well, readers, this has been fun. It’s nice to get back into the rhythm of these Spotlight! posts. I’ve been doing so many Zoids ones that, added to my month-long hiatus, I almost forgot how to set the stage for these articles! Stay tuned for a new, non-Zoids focused post soon. It should be a rolling-ly good one.

Yes, that was a veiled hint about the following Spotlight! topic. 😉 And it is the only one you are going to get for now, since I have to start planning that post. ‘Til then –

Leave a Reply to The Mithril Guardian Cancel reply