Today’s topic is an odd one because normally I don’t read books about the Marvel characters I enjoy. This is due mostly to the fact that there are so few novelizations that don’t relate specifically to the comics. The Marvel Masterworks anthologies contain replicas of the original comic books, not black and white original tales or blow-by-blow accounts from the comics themselves.

Five Decades of the X-Men is a collection of short stories, one of which is almost certainly a translation from the first X-Men comic ever written. Published in 2002, the writing here isn’t very good. I don’t know if Stan Lee himself actually edited it but typos, bad grammar, and similar errors abound throughout the anthology. That doesn’t hurt the stories in any major way but it is annoying.

As the title suggests, each piece within this collection is from a different decade of the X-Men’s extensive history. The first tale is from the 1960s, the second from the ‘70s, and so on until the early 2000s, just before Marvel went really crazy. They were drifting that way in the mid-90s, but everything began truly falling apart around ’05, with the famous/infamous Civil War arc.

That’s a topic for another day, though. Five Decades of the X-Men begins, fittingly enough, with a near-direct translation of the first X-Men comic. Titled “Baptism of Fire, Baptism of Ice,” it is told from Bobby Drake/Iceman’s viewpoint. Jean Grey is introduced to the X-Men just before the team has their first battle with Magneto. In the finale, while on a date with a pretty girl, Iceman ends up in a fight with (possibly) a Frost Giant from Jotunheim.

As a story, this installment is just fine. It demonstrates the problems which Jean (known as Marvel Girl early in her career) had to face joining a team full of curious and flirty teenage boys. Since he was the youngest boy and uninterested in dating her, Bobby caused Jean less trouble on this front than Angel and especially Beast did. Surprisingly, Beast made some pretty blatant, determined passes at the new girl during this tale. Given his later, more mature depictions, I never expected to see this kind of behavior from him.

The end for this story was good, in no small part because it showed Stan Lee’s recognition that not everyone fears mutants on sight. Some actually like them and think they are amazing. Although these normal humans might be surprised by a display of astonishing powers, that doesn’t mean they automatically hate mutants. But on the downside this translation adheres far too closely to the original comic’s perspective. It is clearly a narration of a visual story. It gets a little better toward the end, but not by much. 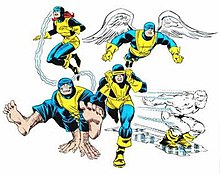 Following this tale is “First Commitments.” This piece is much better written than the previous story. Jay Sanford, a normal human, is waiting for a job interview at a company called Genetech. Sitting beside him is Hank McCoy – The Beast. To pass the time the two strike up an amiable discussion. Jay feels far inferior to Hank during their chat, as the latter’s intelligence is evident even in a relaxed conversation. So he isn’t surprised when the X-Man gets the job and he is passed over.

However, he is surprised when Genetech calls a few days later and offers him the job Hank supposedly got.

Jay sets to work with a will, studying mutant cells “donated” to Genetech for research purposes. Unfortunately, what he discovers too late is that the company is a front for an organization called the Secret Empire. As power hungry as HYDRA but a bit more subtle, the Empire has infiltrated almost every government branch, police force, etc. in the U.S. In the comics, they actually managed to frame Captain America for a crime and make him a wanted fugitive – until he defeated them on live television on the White House lawn, that is. 😉

Right now, though, the Secret Empire is still in the clandestine stage. And they have used Jay’s discoveries to turn mutants – specifically a number of captive X-Men – into human batteries. Angry and afraid, Jay cannot report the Empire to the authorities because they have been infiltrated to such a degree. Then he gets an idea. Slipping away from the spies that he knows are watching him, Jay manages to get the X-Mansion. Once there he tells the X-Men what he knows and asks for their help.

This has to be my favorite story in the collection. Jay is presented as a thoroughly decent guy who doesn’t care that mutants are different from normal humans. He only cares about what is right, to the point that he risks his life to help stop the Secret Empire in the only way he can. It’s an excellent tale, and possibly the best in the anthology.

“Up the Hill Backwards” is next. Set in the 1980s, it takes place after a battle in NYC that decimated the Morlocks and left a number of X-Men severely wounded. The Morlock survivors and injured X-Men have been taken to the Muir Island Research Center to recover. Since it is run by friend of the team Moira McTaggert, they know they can convalesce without fear of being attacked. But until the injured team recovers, the X-Men are officially out of commission while the downed members to recover.

While they are doing this, Storm and Wolverine head out to deal with some…personal matters. This means they can’t train the new X-Men – Rogue, Psylocke, Dazzler, Longshot, and Havok – who will be required to maintain Professor X’s dream of human/mutant coexistence. So Storm asks Sean Cassidy – formerly known as Banshee – to teach the newbies the ropes.

It is not an easy assignment. Psylocke is arrogant and far too sure of herself, while Rogue is still regarded as a potential enemy due to her mishap with Ms. Marvel. Dazzler is withdrawn, nervous, and has a grudge against Rogue due to an entirely different misunderstanding. And Longshot is as naïve as a child because he’s from an entirely different dimension and has no idea what this world is like.

Worst of all is Havok, Scott Summers’ younger brother Alex. Banshee hopes he will lead the team, but Alex doesn’t want to do it. This isn’t just because he is tired of super heroics and desires a normal life. He’s certain that Sean only wants him to lead the team because of his relationship with Scott, the legendary leader of the X-Men.

That’s not Sean’s intent at all, but Alex won’t listen to reason. He doesn’t recognize his own leadership potential, and combined with his distaste for the role, he only succeeds in making things harder for Banshee. Until an exercise with British intelligence goes horribly wrong, the group looks more like a band of squabbling children than a united team of superheroes.

In terms of storytelling, this installment is very good. Unfortunately, it comes with an attached Warning for Younger Readers. There is a fair bit of foul language present in this tale, which surprised me. I was under the impression that sort of thing crept into the comics in either the ‘90s or the 2000s. Apparently that wasn’t the case. There is also quite a bit of gore, but it isn’t particularly graphic. Not by my standards, at least. So “Up the Hill Backwards” is still a good read, but the language and gore may be a serious problem for some young readers.

Now “The Cause” I disliked a fair bit. Set in the ‘90s, this story revolves around the release of one of the X-Men’s enemies from prison. Reverend Striker – no preacher in the X-Men films – is being released on good behavior. But that performance doesn’t extend to mutants in general or the X-Men in particular.

What is more, Striker’s followers are letting them know it. Led by his right hand man Gabriel Merritt, the “Striker Crusade” has been murdering mutants left and right to send the message that they are ready and willing to kill them all regardless of race, sex, or age. They’ve stirred up a hornet’s nest that has started race riots all over the country. Merritt is pleased with these events but he is not so happy with one of his Crusaders.

More than a little crazy, this girl has developed an intense crush on Merritt. She makes her murders or the murders she participates in more gruesome and twisted for that very reason; she is hoping to impress him and make him fall in love with her. So when he gives her the cold shoulder, she’s more than a little upset. And when his attempt to boost the Crusade by having Striker murdered goes awry, “the voices in her head” give her a new target to focus on. (Hint: it isn’t Striker.)

Thinking back, I believe that this story probably qualifies for a Warning for Younger Readers, too. “Cause” starts with the brutal murder of a young mutant making a living as a stage magician, and it’s about as cruel as you can imagine. So this is a story some younger readers may wish to pass over for a few years along with “Up the Hill Backwards.”

Finally, we have “Gifts.” Set in the early 2000s, this tale follows a more mature Rogue, a humbled Psylocke, and Nightcrawler as they race to save people from Laguardia Airport during an apparent earthquake. With Cerebro detecting mutant activity in the area, the X-Men know they are dealing with one of their own. The problem is they don’t know who they are dealing with. The damage has no discernable pattern or purpose, no one claims credit for the wreckage and, luckily, no one is killed. It looks less like their new mutant is trying to make a statement and more like he/she is just having a temper tantrum.

In addition, each of the X-Men experience strange sensations of increased power during their midnight rescues. The source isn’t immediately visible to these mutant combat veterans/ first responders, but it proves to be as amazing as it is dangerous. By the time they get everything sorted out, dawn is coming.

I enjoyed this story almost as much as “First Commitments.” “Gifts” is vintage X-Men, following the team of three as they search for a mutant just discovering the power they have. There are no villains here and, aside from the constant trouble with earthquakes, no huge stakes. Best of all, this story is very young reader friendly. No curse words, no gore, and no sex. 😉

But you don’t have to take my word for it. Pick up Five Decades of the X-Men at your earliest convenience, readers. Despite the poor grammar (and “The Cause”), this is one Marvel book anyone would be proud to have on their shelf!