Welcome back to the Wild, Wild West, readers! Here is yet another review for a Louis L’Amour novel that you may peruse at your pleasure. I am making up for lost time on this, am I not?

Well, it cannot be helped. I have reviewed lots of other books, and left one of my favorite authors on the shelf. That should not have happened. So now this blogger intends to see to it that a great man’s work is exposed to a good bit of daylight. This time, the focus is another western of Mr. L’Amour’s: Flint.

Jim Flint, under the alias of James T. Kettleman, is headed back west. Having come east to disappear, he is now headed west to do the same. See, Jim Flint is a big, powerful man. He has been strong since boyhood. Who his parents were he has no idea, for he was found and raised by a wandering gunman who only went by the name Flint.

Well, Flint met the end which was the doom of many a gun hand. Jim did not take this too well, and he had a lot to say about it – mostly with his own six-shooter. That is why he disappeared east, taking the name Kettleman when he did, a play on “cattleman.”

Now he is going back. Diagnosed with cancer, Jim Flint is headed back west to die.

His wife, whom he married simply because he wanted company, does not want to wait for the cancer to run its course. While he was back east, Flint made a fortune in the stock market and on many other business ventures. He is one of the wealthiest men in the nation, getting wealthier all the time. So, with her father’s help, Mrs. Kettleman planned to kill Jim.

But she does not know her husband very well, since Flint is a man of sparse speech and very reticent about his past. This meant that she and her father had no idea Jim was good with a gun – and better than the man they sent to kill him at a gambler’s table on a ferry.

They are also initially unaware of the fact that Jim knows they want his money. And he has no intention that they should see a penny more than he wishes to leave them (i.e., he will leave his wife enough to live on, but not in the way she wants to live on it). With his lawyer’s help, he sets up all his assets to be liquidated as he sees fit, making sure his wife and father-in-law will not get his fortune.

Now, on the train west, Flint spots a man who is definitely trouble. This man is Buckdun, a hired killer. Jim does not know his name yet, but he knows his type; dangerous as you can find. Jim Flint also spots a very pretty young woman on the train whose name he overhears: Nancy Kerrigan.

Now Nancy Kerrigan, owner of the Kaybar Ranch, has her own problems. Settlers are streaming west, and a former political animal – now styling himself a businessman – has come to the locale of her ranch from back east to make his fortune in the unimaginable wealth of the west. Port Baldwin is trying to become a power in the area. This concerns Nancy because her ranch, the Kaybar, is a land claim. She has no title, no deed, for it. Her father purchased some of the ranch land from the Indians, but Indians do not give out titles or deeds. What is more, one Indian can always claim that those Indians who sold the land had no right to sell it.

This puts her ranch and livelihood in serious jeopardy. Her father and her uncle built the ranch up over the years, held it against Indian attacks (which she lived through), and she does not want to lose it. The Kaybar is her home, and she intends to hold it no matter what.

The biggest, most immediate problem with this is that Port Baldwin has started to brew a range war. Range wars are ugly, violent affairs that can end very badly for those involved. And when Nancy sends one of her hands out to file a claim on the Kaybar so she can later buy the rights back from him, along with several others, the man is ambushed and left for dead.

Enter Jim Flint, who has no intention of getting caught up in a range war but who also does not care if he lives through it or dies in it, since he is going to die anyway. And a man who has nothing to lose is a one big bag of terrifying. With no fear of his own death, Flint cannot be forced to simply back down. If you want him out of your way, you will have to kill him. And he is a hard man to kill.

Flint is one of L’Amour’s more complex stories. Jim Flint does not fit the type of the western hero with which we are all familiar; even among L’Amour’s own stock of protagonists, he stands out. He is different, harsher, because he is going to die…

From here, you will have to break your own trail, readers. Have fun reading Flint, and may you find many more L’Amour stories to interest you as time goes by!

May there be a road! 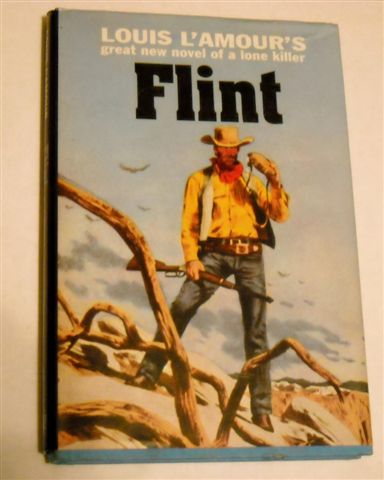