Welcome back to the deserts of Zi, readers! Now you know that I have returned in truth, for only the Mithril Guardian could afflict her long-suffering followers with another post about an obscure mecha anime. Rejoice, for you are not following a hacked blog..!

Okay, enough with the hyperbolic preamble. I have seen a lot more Zoids posts here at WordPress, which tells me that the franchise has returned to public knowledge. So, although I am not a fan, it appears thanks are owed by this blogger to the writers who came up with the latest Zoids series. Kudos, Zoids: Wild. You brought interest back to our favorite planet in the far reaches of the Milky Way. The story is not what this author would consider entertaining, but at least it succeeded in renewing curiosity about the larger world of this mecha anime. I can be happy about that. 🙂

Today’s zoid is from the Guylos Empire. Known as the Helcat, this panther-style mechanical combat unit is “the ultimate stealth zoid.” The cockpit, naturally, is situated in the zoid’s head. The green band that wraps around its “face,” where its mouth should be, is the visible part of the canopy. Once inside, the electrical imaging device in the cockpit will activate, giving the pilot a green tinged one-hundred-eighty degree view of the field.

A typical Helcat’s armaments belie its deadly potential. Normally, the Helcat’s only weapons are a small, double-barreled cannon on its back and a mini gun of some kind between its forelegs. There are is another, lighter type of gun attached to each of its shoulders and hips occasionally, but too many more weapons would weigh the zoid down and increase its noise output. With light armor, weapons, and speed, the Helcat is a combat unit that can fire quickly before ducking back into the shadows to escape larger zoids. The zoid has other assets, though, and they are like no other. Equipped with a cloaking device known as an optical stealth unit, the Helcat can easily blend in with its surroundings. The zoid can also erase most of its own footprints and reduce its heat signature significantly. It also has muffled joints which make it hard to track by sound.

Combined with its cloak of invisibility, these devices make the Helcat almost undetectable. The muzzle flashes from its cannon do not give away its position reliably, since the pilot can move across the battlefield with relative impunity due to being largely invisible to the naked eye. And since Hel Cats are always deployed in groups, there are often several muzzle flashes appearing across the combat zone. Choosing one and hitting it is nearly impossible for an opposing pilot, even when he chances to spot the Cat’s outline against the background scenery.

This is one zoid that can give the best of pilots a hard time. Unless the Helcat’s cloaking device shorts out, or the opposing pilot sees the zoid’s outline against the terrain and keeps it in sight long enough to attack, it is impossible to track and hit this mechanical panther. If the Empire or a particular pilot enjoys the elements of surprise and bewilderment, this is the zoid for them.

Of course, the Helcats do have their vulnerabilities. Aside from the potential malfunctions with the optical stealth unit, a pilot in Zoids: Chaotic Century developed a handy technique to deal with the Cat. By using a computer to track the acoustic signals – i.e. the sounds Helcats cannot help but make, even with their muffled joints – he was able to pinpoint the position of every Cat on the field. 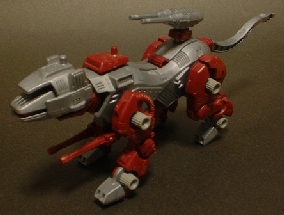 Also, the Cat’s speed and agility do not protect it from larger, faster zoids’ head on charges or higher caliber weapons. The Helcat is designed to bewilder and surprise an enemy, not beat it in a competition of speed and skill. There is a reason they are often deployed in large numbers, after all; a battalion of cloaked Helcats stands a much better chance of taking down opponent(s) than a single or small group does. Unless their target is totally unprepared, has no military training, or a zoid with even lighter armor, the Helcat will not stand a chance against him in a direct confrontation.

Still, despite these restrictions, the Helcat is an extremely versatile zoid. For a pilot who fights by relying on deception by fooling his target’s eyes, this Imperial mechanical combat unit is his best choice, bar none. Though eclipsed by the Shadow Fox in New Century Zero and rendered unimpressive by the technology in Zoids: Fuzors, in Chaotic Century no other stealth unit on Zi can compete with the Helcat.

That’s not to say that the Helcat is indefatigable. While Chaotic Century gave the zoid one of its best showings, it didn’t provide viewers with a demonstration of what the Helcat could really do. Most Helcats arrived on the scene only to be dispatched relatively quickly, which is a shame. I would like to see what a Helcat was truly capable of in the right hands. 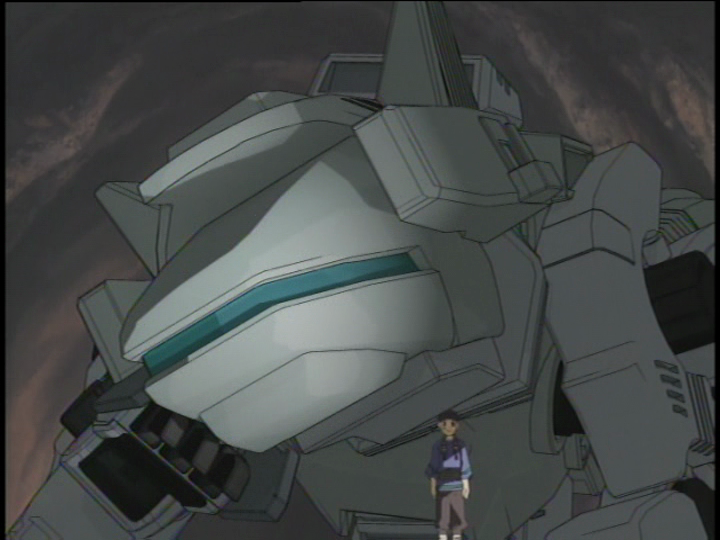 Teevrol and his pilot, Niccolo

Usually, the Helcat is painted red and black, the preferred colors of the Imperial Army. There have been other color choices, however. One Helcat in Chaotic Century was a white/grey/powder blue named Teevrol, who could move about on his own, though he was too attached to his young pilot to leave him. In Zoids: Fuzors, a black Helcat appeared, but it was defeated quickly in both episodes where it showed up.

All in all, the Helcat is not a zoid to shun. With its optical stealth unit, muffled joints, and ease at avoiding detection, it really is the cream of the stealth zoid crop. And while it never got to show its true colors on screen, it is still a mechanical combat unit I would sincerely like to pilot.

Besides, who can say no to such a cool Cat? 😀

See you on the battlefield, readers! 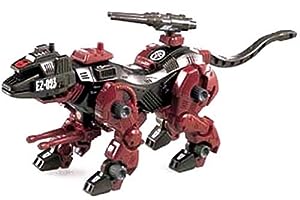