If you guessed that I have at last seen Rogue One: A Star Wars Story, readers, then you have good deduction skills. Yes, I saw Rogue One a day late and a dollar short. But after the less-than-exciting The Force Awakens, I was a little leery of any Star Wars fare.

I enjoyed the trailers for the film – I even reposted one from borg.com here at Thoughts on the Edge of Forever. I wanted to see Rogue One. I wanted to like it. But I did not want to spend money on a film I would later wish I had not paid good cash to see. So I waited and saw it on DVD.

It was a great movie, and it belongs right up there with the original Star Wars trilogy, in my opinion. Yes, there were a few small things about it that I did not like – Leia’s CGI face was kind of scary, and I never got to see the Ghost escape the Battle of Scarif. But since Hera and Chopper have appeared in Lego Star Wars: The Freemaker Adventures, I guess our Rebel band got through the battle safe and sound.

On the whole, the film was a hit with this viewer. Cassian and Jyn came off as sullen more often than not, but their supporting cast more than made up for this. Chirrut Îmwe, Baze Malbus, K2-SO, and Bodhi Rook were great fun. I would have to say that Îmwe was my favorite. From his Force mantra to his, “Are you kidding me? I’m blind!”, Îmwe was one lovable character. Yoda would have found him an apt pupil.

K2 would probably be my second favorite, partly because he is portrayed by actor Alan Tudyk, the pilot of Serenity in Joss Whedon’s Firefly series. The other reason I liked him is because he came off perfectly as a sassy former Imperial droid you could not force to behave. Despite that tough shell, though, he also proved to have a soft side, such as when he apologized for smacking Cassian and when Jyn handed him a blaster in the Imperial base on Scarif. And watching him kill Stormtroopers was a scream – for them more so than for me!

Baze was my third favorite and the perfect counterpoint to Îmwe. Where Îmwe is the true believer despite all the evidence that calls for despair, Baze is the former believer who has become a cynic due to the heavy losses he has suffered since the Empire came to power. I have to admit, I really wish I could have his blaster mini-gun as well!

My fourth favorite would probably be Cassian. Raised in the Rebel Alliance, fighting the Empire from the (rather unbelievable) age of six, he is a Rebel assassin and spy. He also happens to hate most of his job. There is very little warmth in him at first; as I said above, he and Jyn tend to come off as grim for most of their time on screen. This is kind of irritating, which is why Îmwe and K2 are higher on my favorites’ list.

But considering that Cassian and Jyn have dealt with the Empire’s brutality and the often necessarily nasty tactics of rebelling against it, there is very little reason for either of them to smile or joke or be lighthearted. Îmwe and Baze have suffered losses at the Empire’s hands, but they have never had to compromise their moral compasses when fighting it. K2 is a droid built to kill, much like the Knights of the Old Republic’s HK-47, so he regards battle as just another day at the office. Bodhi is new to the Rebellion. He has also never stepped outside of the “law” prior to Galen Erso’s urging to defect to the Rebellion. Cassian and Jyn did not have any of these luxuries.

Jyn was not a bad character, though after a while I did become a little bored with her. I enjoyed the scene where, after her father has been killed and her Rebel escort has returned to the ship, she raises her hand – only for Îmwe to catch and hold it in the manner of a friend. He was silently reminding her not to return death for death, and I thought it was a very touching gesture. Yes, Cassian was going to kill her father. Yes, the Rebel Alliance bombed the base in order to kill him. But killing Cassian would not undo any of that, which is why Îmwe took her hand to stop her from losing her temper.

Finally, we come to the Battle of Scarif. What a fight! I loved every minute of the X-Wings zooming around and zapping TIE fighters to atoms. I have not winced, jerked, and bucked in my seat while watching a Star Wars battle since I was young and viewing A New Hope for the millionth time.

Speaking of which, the reused footage of Red and Gold Leader from A New Hope was great. I almost squealed with delight as I recognized the actors. I could tell that the footage was original – I watched A New Hope almost as often as I watched 101 Dalmatians or Peter Pan when I was small. I made the trench run with Luke and the other Rebel fighters zillions of times, so I knew Red and Gold Leader very well by sight alone. Finding them in Rogue One was a treat!

The other wonderful – and amazing – thing about the Battle of Scarif was the land battle. As someone I know pointed out, the footage of the Rebels fighting in the jungle was reminiscent of the way American soldiers fought in the Vietnam War. The way the troop ships dropped Rebel fighters onto the beach was a parallel of the deployment of soldiers and Marines in the jungles of Vietnam, too. The Rebels charging across the beach resembled Marines running up the beach on Iwo Jima and the soldiers storming the beaches of France on D-Day, but the drops by the troop ships were unmistakably based on Vietnam deployments.

Some of the Rebels’ gear, too, resembled the uniforms used by American soldiers during Vietnam. Several of the unnamed Rebels’ helmets and jackets were the same style as Vietnam War helmets and uniforms used by American soldiers during that conflict. The door gunner shooting at the AT-AT Walkers was also a direct nod to Vietnam door gunners. I was proud to see these parallels. It is high time our Vietnam veterans were acknowledged like this and I think it is a compliment. 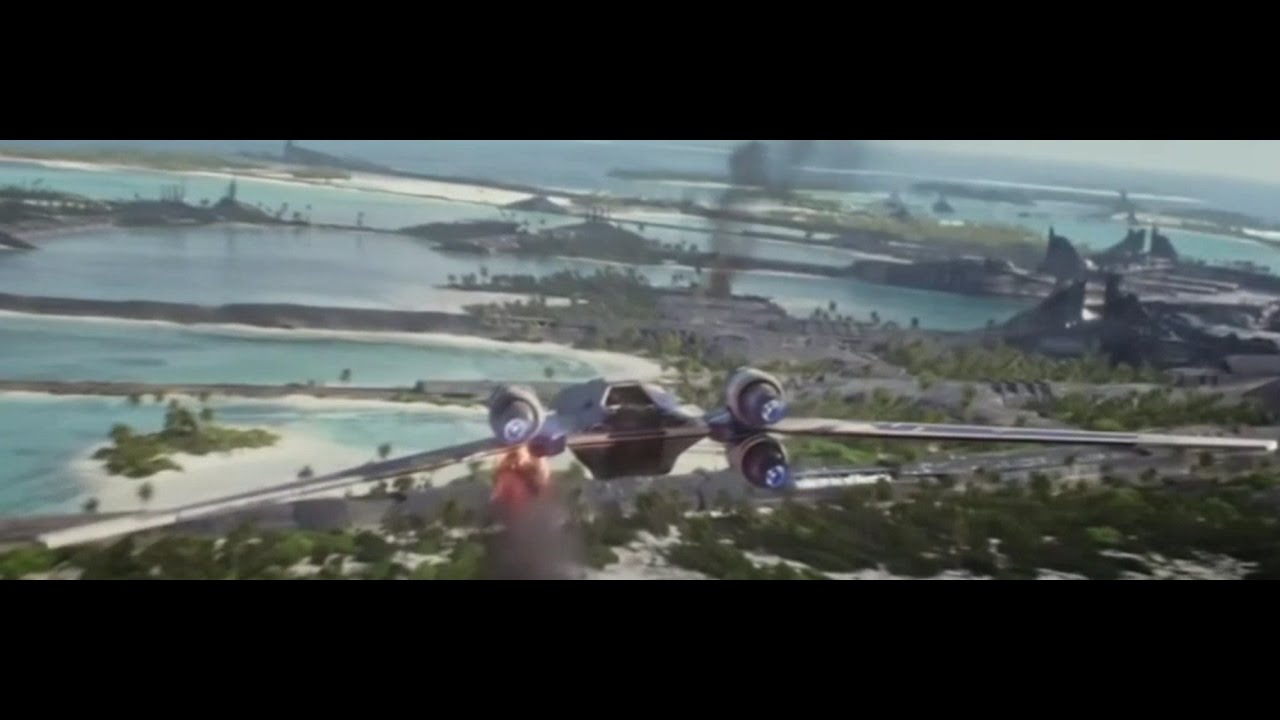 Finally, no review of Rogue One would be complete if I did not mention the winks and nods the writers added to let us know that the cast of Star Wars Rebels lives beyond their fourth season. At least, Chopper, Hera, and the Ghost survive the series’ final season. When Cassian shows Jyn the force of Rebel assassins and spies he has collected to help her steal the Death Star’s plans, someone can be heard paging “General Syndulla” over the PA system. Hera Syndulla, captain of the Ghost and Phoenix Sqaudron’s fighters, is at some point raised to the rank of general during or after season four of the television series.

Chopper can also be seen by the keen-eyed when the Rebel radio operator charges out to speak to Senator Mon Mothma. This is after the Rogue One crew begins their attack on Scarif. I missed Chopper in the film, sadly, but I had already seen him on the Internet during one of the Rebels’ Recon episodes. And I did hear him grumbling while watching the film. Huzzah!

Just like Chopper, I also could not keep track of the Ghost for most of the space battle above Scarif. This upset me because I could not see if the Ghost had escaped before Darth Vader’s Star Destroyer arrived and began blasting the Mon Calamari carrier to bits. My friends went back to the battle scenes after we had finished the film and replayed them in slow motion so I could see the Ghost. (I have very kind, patient friends who put up with A LOT from me.) With the film slowed down I was able to see the Ghost in action for much of the fight. As in the television series, she was protecting the carrier in the fleet rather than swinging farther out into the battle with the star fighters.

However, we never get to see the Ghost jump to hyperspace before the Executor, Vader’s flagship, arrives. I am still a little upset by that, I admit; I would have liked to see them fly away from Scarif safely. But c’est la vie!

I was also not as impressed by Darth Vader’s “temper tantrum” aboard the Mon Cal cruiser, as others were. But I can just picture what some of the Rebel crewers had to say when the scene was over and the director called “Cut!”: “Killed by Darth Vader. BEST DAY EVER!!”; or “This is so going on my resume!”; and the perennial, “I feel fulfilled!”

All in all, Rogue One was just as good as I hoped it would be. I was bummed that the main cast died, so I do not think I will be watching it as often as I once watched A New Hope. But I did enjoy the film, and I do wish I had gone to theaters to see it on the big screen. Those, however, are minor quibbles. This was a great movie, and I highly recommend it to you, readers! So remember –

The Force will be with you, always!