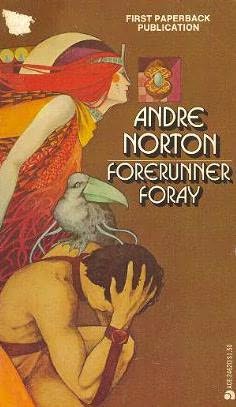 And we are back in one of Andre Norton’s amazing stories, readers! Today’s title is one of her space novels, Forerunner Foray. This story focuses on a girl with the talent of psychometry.   For those of you who do not know, psychometry is the ability of someone with extrasensory abilities to see the history of any object they touch. The “sniffers” in the film Push are psychometrics. They touch an object, handle it, and can tell who used it before they picked it up. There are other characters in other stories that can do the same thing. Jedi Knight Quinlan Vos, for example, was a psychometric. This was not through any special skill of his in the Force but due to an inherent ability in his humanoid species.

Parapsychology and telepathy are standbys of Andre Norton novels, which you probably know by now, readers. Forerunner Foray is set in the far future, on a world called Korwar. A pleasure world, the wealthy come here to play, while the poor live in a place amid the splendor called the Dipple.

The Dipple began life as a “temporary” refuge for people fleeing some sort of war – or series of wars – in the galaxy. Gradually it turned into a permanent camp of poor people. It is a little like the Undercity on Taris in the Knights of the Old Republic game. If you are sent down there, you stay there, unless you are only visiting. No one born in the Dipple ever gets out on their own, either.

Ziantha was lucky. Her telepathic talent and psychometric ability attracted the attention of one of the highest members of the Thieves’ Guild: Yasa, a feline/humanoid Salarika. Yasa plucked Ziantha out of the Dipple and had her taught everything she needed to know to become a skilled thief. Because of this and the oath Ziantha took to become part of the Guild, Yasa as good as owns her.

At first, though, Ziantha does not really seem to mind this. Especially as she goes on her first major “foray” into the apartments of a member of the Guild who was kicked off-world. Yasa wants some information from the data cubes this guy keeps in his treasure rooms. What is the safest way to get the information without his knowledge? Psychometric readings.

Only to stop by a table filled with, presumably, other valuable artifacts. I say presumably because the one which has caught Ziantha’s mental eye is a nondescript lump of clay or stone. Whatever this thing is, it is dragging her attention toward it.

Ziantha reaches out to touch it, then snatches her hand back. These apartments and rooms are the property of a head honcho in the Thieves’ Guild. Just because the government caught him in illegal dealings and kicked him off of Korwar does not mean the booby traps littering his residence have been deactivated. If she so much as touches that object, she could set off an alarm.

And so Ziantha does not pick the object up as she desires. She instead escapes back to Yasa’s villa and delivers the information safely. The mission is so successful that Yasa promises Ziantha whatever she wants as a reward. While considering this in her rooms, Ziantha realizes that what she really wants is that lump of clay.

So she goes back to get it – and the adventure begins.

Forerunner Foray is a complicated story. You have to follow Ziantha carefully or you will get lost as her adventures take her out of herself and, perhaps, even out of time. During the course of her adventures, she learns what she is really made of – and what it means to be free.

That’s all you will be getting out of me, people! If you want to know more, then you will have to go on your own “foray” to find a copy of this novel to peruse at your leisure. This is as far as I am taking you. Happy hunting!