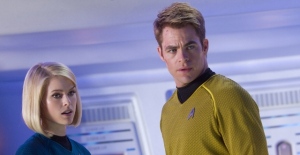 That is my drink!  Hands off!

First you shortchange me on the Klondike bars, now you go after my drinks – do you want another round of Torture DiNozzo Week?

Right.  Now that I have my drink back, we can resume probing the final frontier.

Come on, DiNozzo!  This is what makes life interesting!  Besides, this is my forum.  I get to talk about whatever I want whenever I want.

Anyway, back to my real reason for stopping by.  One of the things that I noticed about Into Darkness is how Kirk handles the film’s two leading ladies: Lt. Nyota Uhura and Carol Marcus, Admiral Marcus’ daughter.

In Uhura’s case, Kirk now respects her as a friend.  He is no longer contemplating pursuing her, as he tried to in the first Star Trek movie.  This makes sense; it would not be smart for Kirk to continue chasing her after she so obviously showed her preference for Spock in the previous film.

One scene that I enjoyed from Into Darkness occurs after Kirk, McCoy, Sulu, and Uhura have returned to the Enterprise in one piece.  It is the scene where the volcano Spock is attempting to stabilize begins to erupt.

Kirk tries to find a way to safely beam Spock back to the Enterprise from the heart of the volcano, only to come up against numerous physical dead-ends.  As the situation escalates, it is easy to see that Uhura is becoming overwhelmed by her fear for Spock’s life.

Kirk sees this, too.  He is watching her during the discourse with Spock over the comm. and he sees her beginning to lose control.  He keeps shooting her glances that say, “Hold on!  We’ll get him back!”  A couple of times Kirk even raises his hands to waist level, palm up, as if to say, “Just keep it together!  We’re going to get him!”

When the situation reaches its crisis point, the one where Spock says, “The needs of the many outweigh the needs of the few,” Uhura nearly bursts into tears.  Kirk looks at her, looks back at the screen, then asks what Spock would do if their positions were reversed.  It is possible that Kirk said this to snap Uhura out of her emotional spiral, trying to get her to concentrate more on saving Spock than on the idea that she would never see him again.  Whether or not that was the point, McCoy jumped into the breach and crassly suggested that Spock would let Kirk die.  This is proved untrue later in the film, but we covered that in my post ‘Into Darkness,’ so I am not going to rehash it now.

After Pike is killed and Kirk gets the Enterprise under him again, the brash young captain discovers that Uhura and Spock are having a fight.  This shocks him.  Actually, it is a bit of a surprise, because in the first film it was implied that Uhura and Spock understood each other very well and had a perfect system of communication.

Not so much so in Into Darkness.  I am with Kirk.  What the heck is it like to be in a lover’s spat with a Vulcan?  I would think it would be absolutely exhausting.

In the end, of course, Uhura and Spock re-establish ‘communications’ and stop fighting.  This is achieved on Kronos, of all places, when she and Kirk both express their disappointment with Spock’s attempt to switch off his emotions.  Ironically, Uhura becomes upset at Spock for controlling his emotions in the volcano when she was fast losing her hold on her own feelings at the same time!

Hollywood lovers’ spats – gee whiz!  How dumb can it get?

Still, I cannot get over Kirk’s attempts to calm Uhura down earlier in the movie.  It is a well-performed scene that shows just how far their friendship has progressed since the first film; Uhura trusts Kirk enough that she will pay attention to him now, and Kirk shows here that he respects her.  I guess it comes of the two of them having a mutual friend in Spock.

That, and even starships are too small for people to completely avoid each other.

Now we come to Kirk’s ‘friendship’ with Carol Marcus.  From the minute he lays eyes on her, the audience can tell Kirk likes her.  For her part, Marcus appears to totally blow him off.

The last time someone blew Kirk off successfully, it was because they already had a boyfriend: Uhura studiously refused all of Kirk’s advances in Star Trek.

This time around, though, Kirk has run into a lady who is very hard to impress.  While Carol Marcus seems to think as highly of Kirk as he does of her, she still keeps him at arm’s length.

Honestly, I think this may be one of the reasons he likes her so much.  Carol shows more spark during Into Darkness than any of Kirk’s previous dates.  This is established in the shuttle bay when, while discussing the torpedoes her father sent with the Enterprise with Kirk, she begins to get changed after telling him to turn around.

Of course, Kirk’s curiosity gets the better of him and he turns back around too soon.  At which time Carol sternly reminds him in a calm, firm voice, “I said, turn around.”

What she was actually saying was, “You may be the captain of this ship, but I am getting changed.  And that is none of your business because it has nothing to do with the safety of the ship.  So turn around and let me finish.”

Kirk’s regard for Carol grows throughout the film.  When she and McCoy go down to the surface to inspect one of the ‘special’ torpedoes Admiral Marcus gave the Enterprise for this mission, McCoy accidentally triggers the weapon and gets his arm trapped in it.  Although McCoy and the bridge crew urge Kirk to beam Carol aboard the Enterprise to safety, Carol strenuously argues that she be allowed to stay.  And she is doing this as she frantically works to disarm the torpedo.

Deciding to trust in the woman’s talents, Kirk is rewarded when Carol safely defuses the torpedo and frees McCoy.  This scene shows her competence under extreme pressure; I would hate to think of how any of Kirk’s previous girlfriends would have reacted in the same situation.

Later, Carol again proves her mettle when she attempts to convince her father not to annihilate the Enterprise, arguing that if he wants to destroy it, he will have to kill her with the rest of the crew.

But while Admiral Marcus may be prepared to send the galaxy into the tailspin of war, he proves that he will not harm his daughter when he beams her aboard the Vengeance.  Carol subsequently proves that she seems to have inherited some of her father’s stubbornness when she slaps him to show her contempt for his decisions.  She may be his daughter but she’s still got a firm grasp on the principles he so deliberately tossed aside.

Finally, Kirk shows how much he has come to respect Carol at the end of the film.  When Kirk walks onto the bridge as the crew is preparing for their five year mission, he checks on each member of his command crew individually, finishing with Carol.  Having lost his father when he was an infant, and more recently his father-figure, Admiral Pike, Kirk understands how Carol feels about her father’s death.  When he speaks to her, Kirk makes his tone and words as comforting as possible.

In this scene, he shows that he does not consider Carol Marcus as simply a friend, or even as a run-of-the-mill one-time date.  He considers her his equal, a woman who can keep up with him no matter where he goes or what he does.  And that shows just how much Kirk has grown during the trials he has undergone throughout Into Darkness.

So where will it go from here?  Beats me, Tony.  But fingers crossed that the next movie is as good as Into Darkness.

Yes, I want the next movie to be better than this one.  But if I go in with my hopes as high as the Seattle Space Needle, I may end up disappointed instead of happy.  So I will go in with my hopes small, and either come out with the same amount of satisfaction or with a mountain of satisfaction.  It is much harder to for me to be disappointed this way.

And you know what else, DiNozzo?  It makes the movie all the more satisfying if it exceeds my expectations!