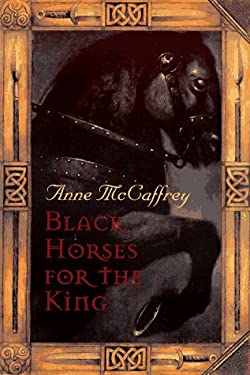 Black Horses for the King is the first Anne McCaffrey book that I have ever read. No, I am not joking; prior to this, yours truly had never done more than peek at a page of Miss McCaffrey’s books. The Dragon Riders of Pern series is on my “to read” list, but so far this blogger has not actually read those books.

Knowing her reputation with those novels, however, Black Horses for the King looked like a good place for this writer to begin getting to know Miss McCaffrey and her work. While it doesn’t strike me as an excellent piece, it is enjoyable and well written. I really have no complaints about it, beyond a few minor nitpicks.

The story begins with Galwyn Varianus, who has been apprenticed to his uncle, a rough sailor and pagan who despises him. Following his lead, the crew picks on the boy mercilessly. The fact that Galwyn is currently cleaning up after six seasick passengers below decks isn’t helping much, since their discomfort is making him ill, too. Despite that, he is doing his best to avoid telling off the sailors; doing that only makes them increase their cruel teasing. But when one of the sailors insults the lad’s mother, Galwyn whirls around, ready for a fight…

…Only to be stopped by Comes Artos, the Dux Bellorum. Artos is Latin for Arthur, making this novel an Arthurian tale. Miss McCaffrey, however, is leaving off the magic and other familiar trappings in order to remain as true to history as she can. She is also focusing on an almost mundane aspect of the legend – the large horses Arthur had to buy to repulse the recurrent Saxon invasions.

Artos is sailing to the continent to buy big horses he can breed with the larger ponies in England so that his men can face the Saxons on better terms. On their ponies the Britons cannot face the pagan invaders, since the animals are incapable of carrying the large Englishmen for great distances or long amounts of time. In order to out-maneuver and overcome the invaders, Artos and his Companions need bigger horses. So they are sailing to Septimania to buy them.

When apprised of the Comes’ plan, Galwyn finds he approves of it. Having grown up in a Roman villa prior to his apprenticeship with his uncle, the boy has a fondness for and skill with horses. He would much rather tend the animals than sail, but due to his father’s death, working at sea appeared to be the best way he to support his mother and sisters until he can find a different profession. And better companions.

But when his uncle’s crew goes too far, Galwyn seizes his chance and escapes his hateful relative’s ship. He then buys a pony and follows Lord Artos to the fair in Septimania. There his knowledge of horses, his ability to bargain, and his skill with languages prove invaluable in the purchase of a large group of black Libyans – stallions, mares, and foals. Following their purchase he, Artos, and the rest of the Companions lead the animals to port in order to bring them back to England.

Shipping the creatures across the ocean is difficult work, since they are as unused to the water as the Companions, who are too busy taking care of them to get sick this time. On their first arrival in England, Galwyn makes a final end to his apprenticeship under his uncle. Staying with Artos and his Companions, he helps bring the other two sets of horses to Britain.

From there, he travels to a farm where the animals will be tended and allowed to breed with each other and the biggest Briton ponies. On the way he becomes apprentice to the horse expert friend of Artos, a man named Canyd. Canyd and his fellow horse masters are trying to make the first horse shoe in order to protect the animals’ feet. As Canyd likes to remind everyone around him, whether they want to hear him or not: “No hoof, no horse!”

Black Horses for the King does not strike me as the best of Miss McCaffrey’s work. Still, it is an enjoyable story that presents a good picture of the times in which it is set. Horse and history lovers will find it a great read, and it is hard to stop once you get going with it. In the final analysis, it is a worthy book from a good author.

‘Til next time, readers!

Round Five, people!  This time we go over to X-Men characters Cyclops and Wolverine.  So let’s start with the obvious question: why have these two polar opposites been switched?

Cyclops has, recently, been turning from stalwart leader (or ‘teacher’s pet’ in Logan’s book) to mass murderer on a scale that would make Magneto cheer and dance.  Meanwhile, Wolverine has exchanged most of his berserker temper for the chance to be a principled leader of the X-Men.  Until he deems it necessary to finally take someone down, that is; something he only does in private.

What, exactly, did I miss?

Wolverine was never this gentle except to girls (Shadowcat, Rogue, and Jubilee, for starters).  In the case of the latter two youngsters, this was because he empathized with their tortured or lost emotional states; while Shadowcat needed a strong man she could relate to almost as a fighting father-figure (she already had the female equivalent with Storm).  At the same time, all three girls gave Wolvie an extra purpose to keep fighting: a young innocent to protect at all costs so they wouldn’t end up like him, dead, or worse than dead.

Cyclops’s job was to get the plan ready and execute it, all the while staying true to the principles of Professor X.  He was the young King Arthur to Professor X’s Merlin; he listened, did what he was told, and everything got accomplished in (almost) the right way.  It was no picnic, to be sure, but it was the right thing to do.  To help keep him on the straight and narrow was Jean Grey, his Queen Guinevere who was loved by Wolverine but, unlike Arthur’s wife, stayed true to her love (when her mind wasn’t being manipulated or something of that sort).

Now the positions have been reversed: Cyclops has exchanged Professor X’s teaching for the speeches and ‘grand’ gestures of Magneto while Wolverine has suddenly straightened up and keeps his claws sheathed until necessity demands they be bared.

It seems that Jean Grey’s inexplicably permanent death (at least in the ‘present’ time of the recent comics) is the root of this change.  On top of that, with the Professor’s sudden loss of direction in his teaching and without Jean to hold him straight, Cyclops is being dunked into his baser nature – and wallowing in it.

Yet Jean’s ‘death’ has had the opposite effect on her clawed knight.  Instead of reverting to his brutish tendencies as he has in the past when she ‘died’, Wolverine has decided to become civilized and adhere to the Professor’s original statutes; at least until such time as his animal rage needs to be unleashed to stop a villain permanently (or as permanently as it has ever been in the comics).

While Jean Grey and Scott Summers have never been favorites of mine, they have been two of the strongest pillars in the X-Men comics, keeping the team on the path of right and forbidding them to go wrong.  Without that support, the X-Men have begun to deteriorate.  Already the team is split: half of the team is firmly entrenched behind Wolverine on the unsteady ethical high ground while the other half blindly follows Cyclops into the moral sewers.  Others can’t make up their mind and spend their time bouncing between both factions while ‘trying’ to do the right thing when they’re not being stretched by opposing loyalties.  It’s total chaos.

The X-Men were a great story because they stood on the principles of right; not only facing evil mutants but a world that would largely be ruled by people in power who had a hatred of them for simply being born different.  Despite saving the world a thousand times in a thousand different ways, there would be people who remained committed to their destruction, just as there would remain villains bent on conquering the planet.  They knew that, and no matter how hard it was going to be to deal with this double hatred, they weren’t going to abandon their post.  That was what made the X-Men strong.

And that, fellow writers, is what has been lost through the latest events in the X-Men comics and Avengers vs. X-Men.