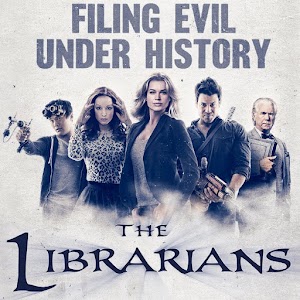 The Librarians, produced by the same crew who gave us Leverage, came out about two years ago. The news of this series’ emergence on the airwaves first reached this writer through borg.com, readers.

I was unimpressed by the advertisements for the show. This just proved how lacking in imagination Hollywood had become. They were making The Librarian films into a TV series now? Could they not come up with anything better?

Well, as you may have guessed, I jumped the gun again with this derogatory assumption. A friend of mine happened to turn the show on one night, and I got sucked into the series after two or three episodes. Before I get to The Librarians proper, however, here is a little bit of background on the origin for the TV show:

The Librarian film saga follows Noah Wyle’s character, Flynn Carson, as he is chosen to be the new Librarian. From there, he goes on various expeditions. The Library is like a living version of the warehouse where the government keeps all of the mysterious artifacts which Indiana Jones has recovered. The Library houses Excalibur, the Ark of the Covenant, the Spear that pierced Christ’s side at the Crucifixion…. You get the general idea. Anything historical and vaguely dangerous/powerful is tracked down by the Librarian of the time and filed safely away in the Library itself.

Every Librarian, however, has to have a Guardian. The Guardian is supposed to protect the Librarian from secret societies bent on world domination, or time traveling ninjas on motorcycles, or other such ludicrous, wicked organizations. Whenever a Librarian or a Guardian dies, the Library selects a new one to take his or her place. For some odd reason, Flynn’s Guardians have all been women.

Flynn was the man chosen to be the Librarian after the guy who previously held the post turned traitor and was killed. I do not know what happened to Flynn’s original Guardian, but as of The Librarians TV series, he has a new one.

Flynn’s “new” Guardian is Colonel Eve Baird, played by Rebecca Romjin, the actress who portrayed Mystique in the X-Men movies prior to Jennifer Lawrence taking the role. A woman who has seen battle up close and personal, Baird is rather trigger-happy at the start of the series. Her modus operandi at the beginning is to protect the Librarian and kill whoever tries to harm them. Only later does she learn that the Library selected her for more than her prowess at killing. And, intriguingly, a Guardian’s main mission is to safeguard the souls of the Librarians; the safety of their bodies is of secondary concern.

Throughout the Librarian movies, there was only one Librarian: Flynn. Now, you will notice that I referred to them when I said Baird was originally a little trigger-happy when the TV series started. That is because there is no longer just one Librarian; there are now four. Flynn is still the main Librarian. He was the one who answered the summons when his predecessor turned evil. Three others were sent for as well, but refused the job offer without knowing what they were actually being called on to do. (The Library is the best kept secret on the planet, naturally.)

At the start of television series, however, Flynn is in serious trouble. He appears to be dying. So the three candidates are invited to the Library again, and this time, they all answer. These Librarian candidates are: Ezekiel Jones, a master thief from Australia; Cassandra Cillian, a genius mathematician with a deadly brain tumor the guys refer to as a “brain grape” for its size; and Jacob Stone (played by Christian Kane, the actor who portrayed Elliot Spencer in Leverage).

Jake is the most “Librarian”-esque of the three. With a 190 point IQ, the ability to speak several dozen different languages (even dead languages), and more degrees than you can shake a stick at, he seems the most natural choice for Flynn’s replacement.

Except that Cassandra saves Flynn’s life after he names her the new Librarian, allowing him to remain the Librarian. So now, instead of guarding one Librarian, Baird has to babysit Jones, Cassandra, and Stone while maintaining her relationship with Flynn. (Yeah, they are boyfriend/girlfriend.)

At the start of the series, magic reenters the world, thanks to the plot of a secret society run by a mysterious man named Dulaque. At the same time, the main Library vanishes into another dimension. Flynn goes to find the Library and bring it back. Meanwhile, the three “sub-Librarians” and Baird hunt down magical items that the Library somehow lost when it was uprooted and yanked to another dimension, or items outside the Library which were reinvigorated with power by the return of magic to the world.

To protect these retrieved artifacts, the team has to keep them in an Annex of the Library. This Annex is under the care of an immortal who goes by the name Jenkins (John Larroquette). His real identity is Galahad, and even now that we know this, we know there is still more to him than meets the eye. Jenkins acts as Baird’s second in babysitting the three “sub-Librarians.” Typically, he stays at the Annex or the Library and does research to help the team figure out what they are up against in a given episode. He rarely enters the field – but when he does, he can pack a punch!

Jenkins and Dulaque – Lancelot du Lac – really do not like each other. The first season ends with the two facing off in a swordfight, which Galahad wins. (He was a better swordsman than his father in the original stories, too.)

On the whole, The Librarians is a far superior series than I initially gave it credit for. In a time when new TV shows are expected to be “edgy,” dark, dreary, and full of pain and dread, this series takes a far different approach.

It firmly places its tongue in cheek and swaggers through its seasons. It laughs in the face of darkness, sneers at pain and dread, and capers madly before the thought of maintaining a bleak outlook on its stories. Whether the Librarians are rescuing Santa Clause, defying Fate, fighting Minotaurs, dealing with the Devil, or are caught in a living video game, the danger is always well balanced by genuine humor and a light touch. Not an episode goes by where I am not laughing at something!

A good part of the reason I am fed up with the noir films and TV shows so in vogue these days is because they take themselves far too seriously. It is gratifying to watch The Librarians nod and wink at the audience. Dean Devlin and his crew have done it again, and I give them full marks for a great series. I cannot wait to see the next season of The Librarians when it comes back this fall!

Until next time, readers!

Round Five, people!  This time we go over to X-Men characters Cyclops and Wolverine.  So let’s start with the obvious question: why have these two polar opposites been switched?

Cyclops has, recently, been turning from stalwart leader (or ‘teacher’s pet’ in Logan’s book) to mass murderer on a scale that would make Magneto cheer and dance.  Meanwhile, Wolverine has exchanged most of his berserker temper for the chance to be a principled leader of the X-Men.  Until he deems it necessary to finally take someone down, that is; something he only does in private.

What, exactly, did I miss?

Wolverine was never this gentle except to girls (Shadowcat, Rogue, and Jubilee, for starters).  In the case of the latter two youngsters, this was because he empathized with their tortured or lost emotional states; while Shadowcat needed a strong man she could relate to almost as a fighting father-figure (she already had the female equivalent with Storm).  At the same time, all three girls gave Wolvie an extra purpose to keep fighting: a young innocent to protect at all costs so they wouldn’t end up like him, dead, or worse than dead.

Cyclops’s job was to get the plan ready and execute it, all the while staying true to the principles of Professor X.  He was the young King Arthur to Professor X’s Merlin; he listened, did what he was told, and everything got accomplished in (almost) the right way.  It was no picnic, to be sure, but it was the right thing to do.  To help keep him on the straight and narrow was Jean Grey, his Queen Guinevere who was loved by Wolverine but, unlike Arthur’s wife, stayed true to her love (when her mind wasn’t being manipulated or something of that sort).

Now the positions have been reversed: Cyclops has exchanged Professor X’s teaching for the speeches and ‘grand’ gestures of Magneto while Wolverine has suddenly straightened up and keeps his claws sheathed until necessity demands they be bared.

It seems that Jean Grey’s inexplicably permanent death (at least in the ‘present’ time of the recent comics) is the root of this change.  On top of that, with the Professor’s sudden loss of direction in his teaching and without Jean to hold him straight, Cyclops is being dunked into his baser nature – and wallowing in it.

Yet Jean’s ‘death’ has had the opposite effect on her clawed knight.  Instead of reverting to his brutish tendencies as he has in the past when she ‘died’, Wolverine has decided to become civilized and adhere to the Professor’s original statutes; at least until such time as his animal rage needs to be unleashed to stop a villain permanently (or as permanently as it has ever been in the comics).

While Jean Grey and Scott Summers have never been favorites of mine, they have been two of the strongest pillars in the X-Men comics, keeping the team on the path of right and forbidding them to go wrong.  Without that support, the X-Men have begun to deteriorate.  Already the team is split: half of the team is firmly entrenched behind Wolverine on the unsteady ethical high ground while the other half blindly follows Cyclops into the moral sewers.  Others can’t make up their mind and spend their time bouncing between both factions while ‘trying’ to do the right thing when they’re not being stretched by opposing loyalties.  It’s total chaos.

The X-Men were a great story because they stood on the principles of right; not only facing evil mutants but a world that would largely be ruled by people in power who had a hatred of them for simply being born different.  Despite saving the world a thousand times in a thousand different ways, there would be people who remained committed to their destruction, just as there would remain villains bent on conquering the planet.  They knew that, and no matter how hard it was going to be to deal with this double hatred, they weren’t going to abandon their post.  That was what made the X-Men strong.

And that, fellow writers, is what has been lost through the latest events in the X-Men comics and Avengers vs. X-Men.