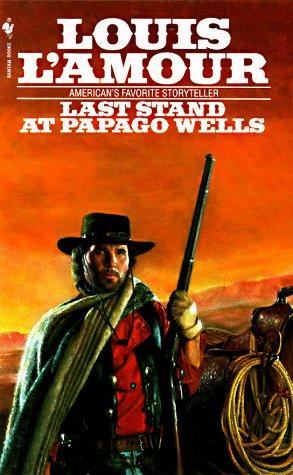 Here we are, readers – the first post of a new year! Today’s topic is a Louis L’Amour novel, one of my favorites. Last Stand at Papago Wells was one of the first two or three L’Amour books that I read, and it has a special place in my heart because of that.

This tale is a beauty. Full of suspense, action, intrigue, and tension, L’Amour poured a great deal into this story. It would make a fantastic film, and I hope someone gets the rights to it one of these days. This is a Western that deserves to be on the silver screen!

Okay, enough of the fan-ranting. It’s time to describe the story!

Logan Cates is drifting through the desert when he picks up a trail going toward Yuma. At roughly the same time, he spots a cloud of dust moving in the same general direction. It could be nothing more than a posse or a few travelers headed West….

But with Churupati, a half-Apache, half-Yaqui Indian raiding, pillaging, and murdering small farms and settlements throughout this section of Arizona, those explanations are not entirely satisfactory. Either set of trails Logan has seen and is following could belong to the renegade’s men. It is hard to make sure at a distance, though one trail definitely seems to have been made by white men and not Indians.

Worried by the flurry of activity in what should be a fairly empty desert, Logan pushes forward. This portion of the Territory is largely waterless; only a few tanks up ahead hold out any hope of water. Known as Papago Wells, these particular tanks fill up with water inch by inch over the desert months. Catch them at the right time and you will find enough water to help you along. Come upon them at the wrong time, and you are dead. Logan needs water, and so he is headed to the Wells to refill his canteens…. 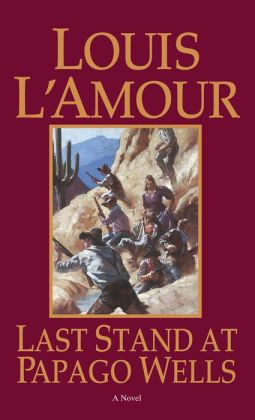 …And that’s the same place everyone else he has noticed seems to be heading as well.

Up ahead, Jennifer Fair and her fiancé, Grant Kimbrough, are on their way to Yuma to marry. Pursuing them is Jennifer’s father, Jim Fair, a well-known and well-respected cattleman. Having been to school back East for the last few years, Jennifer has come to hate her father and Arizona. This hatred has been fed to greater heights by the fact that she saw her father gun down a young man her ten or eleven year old self had a crush on. She is determined to leave the country by any means available or necessary.

Taking advantage of all this, Kimbrough proposed to her. When her father absolutely refused to accept him as a prospective son-in-law, he suggested they run away to marry, which Jennifer was all too happy to do. On the way toward Yuma they happen across the remains of two cowpunchers the Apaches killed and mutilated.

Lonnie Foreman, the only survivor of the attack, pops up from the rocks and explains what happened. Hitching a ride with the couple, they continue on to Papago Wells. There they meet an old buffalo hunter and his Pima Indian companion, who were pursued to Papago Wells by a posse from Yuma after they killed a young man intent on making a name for himself by murdering one or both of them.

Elsewhere, Junie Hatchet is taken captive by a band of marauding Indians. She escapes them temporarily, only to be chased into an outcropping of rock over the course of the following day. A cavalry patrol which was absorbed into the posse finds and rescues her before heading into Papago Wells, too.

Prior to their arrival Logan pulls into the tanks and mentions the Apaches are watching and waiting to strike at those who will congregate at the Wells. Not long after the gang is all together, Churupati puts them under siege. Elected leader of the group, Logan Cates must find a way to keep them all alive until search parties from Yuma, a nearby fort, or Jim Fair reaches them. Otherwise they are doomed to die at the hands of the Apache.

This book is a tense, action packed little novel that will keep you on the edge of your seat, readers. Part horror, part Treasure of the Sierra Madre, L’Amour’s Last Stand at Papago Wells is a worthy addition to any library. It is one of the best stories the man ever wrote. I recommend you pick it up and enjoy it at your earliest opportunity, because you won’t be disappointed by it. 😉 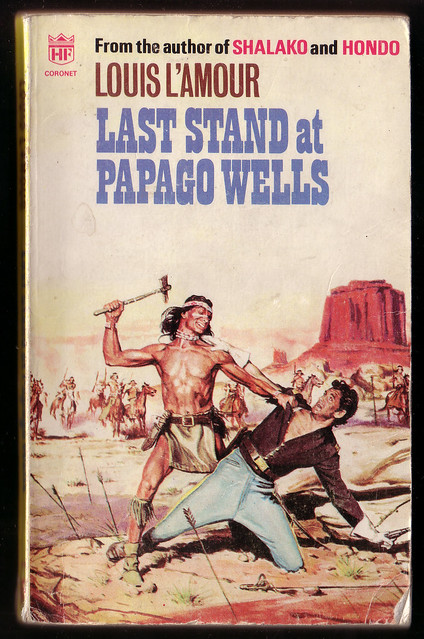 “What is there to approve of? You are beautiful, of course, but you resent the very things that made life easy for you. You resent you father. From the summit of the molehill of your Eastern education you judge the mountain of the obstacles your father faced. You” – he turned away from her – “are like the froth on beer. You look nice but you don’t mean anything.”

“Are there Indians out there? Really, I mean?”

“That’s proof enough. The desert has its own small sounds and when you don’t hear them something is out there warning them to be still.”

“If there are Indians, why did you go out?”

“Looking for places they’ll use for cover when they attack.”

“You might have been killed. You were inviting trouble.”

“Yes, I might have been killed. Each of us is in deadly danger every instant from now until we get to Yuma. But I wasn’t looking for trouble – only a fool takes chances. Fools or children who don’t know any better. Danger is never pretty, it’s never thrilling. It’s dirty, bloody and miserable. It’s choking dust, the pain of wounds and waiting that eats your guts out.

“Nobody but a fool or some crazy kid goes hunting trouble. It’s different when you meet it face to face on a dark night than when you read of it in a book. All this talk of people who look for adventure is from people who’ve had no experience.”

He knew it was none of his business but something impelled him to ask, “Are you really going to marry him?”

Her eyes when she turned to look at him were level and cool.  “I believe that is my business, Mr. Cates.”

“He’s a gentleman,” she added, and was immediately angry for defending him.  “He has breeding.”

“So has his horse…but I wouldn’t pick him to ride in this country.”

“I don’t intend to live in this country.”

“Then you should do all right.”  Her comment rankled, and he said irritably, “What’s wrong with this country?  Your father likes it.  He helped to open it up.”

“I’ve seen how a country like this opened up and I don’t like it. I doubt, Mr. Cates, if you could understand how I feel.”  She looked directly into his eyes.  “I know what kind of man you are.”

“Do you?”  His eyes narrowed as they swept the lava and sand.  “I don’t believe it.  I don’t believe you know anything about a man like me or a country like this.  It takes rough men, Miss Fair, to tame a rough country; rough men but good men.  Your father is in that class.  As for you, I don’t think you’d measure up, and you’ll do well to leave it.  You’re a hothouse flower, very soft, very appealing and very useless.”

“Should I be?”  He glanced at the end of his cigarette, then his eye caught a flicker of movement and he held himself very still, keyed for action until he saw it was a tiny lizard, struggling with some insect at the edge of a bush.  “In the world you are going to, men want pretty, useless women.  They want toys for their lighter moments, and we have those women out here, too, only we have another name for them.  We want women here who can make a home, and if need be, handle a rifle.”

“And you don’t think I could?”

“My father can get along without me.  He has done so for years.”

“And probably during all those years he has been looking forward to the day when you would be with him.  What do you suppose a man like your father works for?  He worked for you, for your children…if you ever have any.”