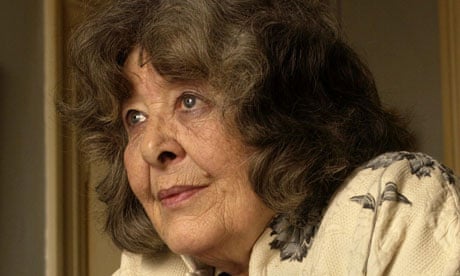 Previously, the first two books in this Diana Wynne Jones’ series – Howl’s Moving Castle and Castle in the Air – were reviewed here and here at Thoughts on the Edge of Forever. It is hard to recall for sure, but this blogger may or may not have stated in the latter post that she wished Mrs. Jones would write a fourth book in the series in the future.

Unfortunately, what I did not know at the time that post was published was that Mrs. Jones had passed away several years prior. If she has completed any more novels, then they have not been and never will be published this side of eternity. In her honor, therefore, this blogger decided to review the third and final book in her Howl’s Moving Castle trilogy. This would be none other than House of Many Ways.

The book begins with Mrs. Baker having a discussion with her great aunt by marriage. Aunt Sempronia has decided that Mr. and Mrs. Baker’s only daughter, Charmain, must take care of her Great-Uncle William’s house. Known to the rest of High Norland as Wizard Norland, Great-Uncle William is going in for surgery to take care of “…a growth.” No one else in the family can find the time to manage the property, so Aunt Sempronia has come in search of someone to mind the manor.

Truth be told, though, Aunt Sempronia has already selected the lucky young person who will manage the house while her Great-Uncle is away. This fortunate youth is the Bakers’ daughter, Charmain. Aunt Sempronia thinks the responsibility would be good for grand-niece-by-marriage, since the child does nothing but read and eat while her Aunt is present. Despite eating so much Charmain is quite skinny. She also hasn’t had to lift a finger to work around the house, with her mother treating her like a caged tigress and her father forbidding her to do anything that isn’t “nice.”

So while she is not pleased to have been volunteered, Charmain is more than happy to have the opportunity to leave home. It is, as she herself admits, the opportunity she has been waiting for. The day before she leaves, Charmain takes out paper and pen to write a letter to the King of High Norland. The King and his daughter, Princess Hilda (whom we met in Castle in the Air), are busy cataloging the royal library.

Charmain loves books, and so working at the library with the King and the Princess has been her dream job for most of her young life. Free of her parents’ supervision for the next couple of weeks, she decides to take the plunge and applies to become their aid in the royal library. Although she is certain the King will dispose of her letter after reading it, Charmain feels better for trying.

The next day Aunt Sempronia arrives and picks her up. During the ride she grills the girl about her skills, asking in the process if she knows any magic. Since Mrs. Baker believes that magic is “not nice,” Charmain has never learned to use it. The idea of being denied her opportunity makes her blanch.

Luckily, Aunt Sempronia doesn’t seem to notice. She rattles off a few more notes about what is expected of her grand-niece-by-marriage until they arrive at the house. They get there just before the Elves come to pick up Great-Uncle William and take him in for surgery. Charmain barely has time to meet him, let alone ask him for instructions, before he is whisked away.

Left to her own devices, Charmain looks around. What she finds is an absolute mess. The taps in the kitchen sink are gone, the laundry has piled up, and dirty dishes abound. Exclaiming at the disaster, the heroine is quite surprised when Great-Uncle William’s voice echoes from the house itself. He has left instructions for her via a briefcase full of papers and a spell that lets him give her directions around the house. 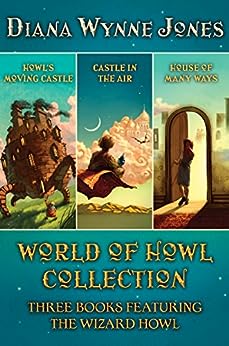 He also asks her to take care of his little dog, a white terrier type animal he calls Waif. Overcome by the sudden onslaught of responsibility, Charmain resorts to her first, best source of comfort. She grabs a book and starts reading….

….Only to find that her mother packed plenty of clothes and her father enough food to last a week. But neither of them packed one book for her to read while she is away from home.

Things pick up from here, readers, but I won’t spoil the rest of the story. Suffice it to say that this book in the trilogy is the one I have reread most. It is the funniest of the three novels, and I do not say that lightly. Everything entertaining in the earlier books is here, plus some. The characters are fantastic, the magic is good, and the hilarity is just pitch perfect.

If you can pick up House of Many Ways, I highly recommend doing so. You cannot go wrong with this book. Some may not like it as much as the previous ones, but this seems rather unlikely to me. How could anyone not find this story as funny as it is heartwarming?

Of course, there is only one way to find out. 😉

‘Til next time, readers! 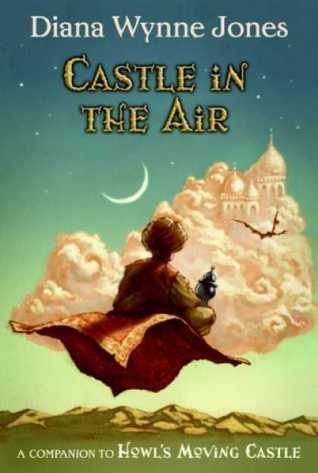 Previously, Diana Wynne Jones’ novel Howl’s Moving Castle was reviewed here at Thoughts. It was so good that I thought an analysis of the sequel was in order. Castle in the Air has the great distinction of improving upon the framework in the original story, something that doesn’t always happen in modern fiction.

It begins in the Sultanates of Rashpuht, a country far to the south of Ingary, the nation where Howl’s Moving Castle takes place. A young carpet merchant named Abdullah is standing in his booth at the Bazaar, daydreaming about being a prince. Though Abdullah’s father was a rich carpet merchant, everything but his booth went to his first wife’s in-laws because he was disappointed in his son.

Just why he was upset with his son Abdullah doesn’t know. And at this point, it doesn’t matter to him, either. Despite his daydreams, Abdullah is a very happy carpet merchant. He sells enough goods to make a comfortable living, and he is content to never be wealthy or leave the Bazaar. In truth, he really does not have a reason to want to leave; his reveries just add a touch of romance to his otherwise ordinary life.

In the middle of his latest fantasy (which, for the first time, features a beautiful princess), a customer appears and asks to sell him a carpet. He wants five hundred gold pieces for the rug, but Abdullah is skeptical. The mat is in bad shape, and even if he wanted it, he certainly wouldn’t pay five hundred gold coins for it.

So when the man says it is a magic carpet, Abdullah is intrigued but disbelieving. He allows the stranger to enter the booth proper in order to have him prove that the carpet can fly. Even when a commotion occurs in the next stall, the carpet merchant keeps an eye on his customer as the man orders the rug two feet into the air.

The carpet does as it is told and, after checking to make sure none of the usual tricks could have been pulled to fake its flight, Abdullah agrees to buy the carpet. Several hours are spent haggling over the price, and he finally pays two hundred fifty gold pieces for the mat before going out to lunch. Worried the rug will fly away when he leaves, Abdullah ties it the center pole of the booth to make sure it stays put.

It does. But in order to keep an even better eye on it, Abdullah puts the carpet on top of his bed (which is made up of other carpets piled one atop the other). During the night, Abdullah wakes to find himself in a luscious garden. There he meets a girl – a princess – who mistakes him for a girl.

How can she make that obvious error? Simple – the only man she has ever seen is her father, the Sultan. Confused, but convinced this is all a dream, Abdullah tells the princess about his daydreams. And because he thinks he is still asleep, he makes it sound like his daylight fantasies are the truth.

The delighted princess, who identifies herself as Flower-in-the-Night, absorbs his tale with avid interest. But when the two try to experiment with the carpet, they accidentally give it the wrong command, sending Abdullah back to his booth post-haste. He wakes up again the next morning feeling blue, until he realizes that he was not actually dreaming. The carpet transported him to a real palace where he met a real princess named Flower-in-the-Night.

Abdullah spends the rest of the day buying paintings of different men so he can bring them to Flower-in-the-Night (who is still convinced he is a woman). Once he has done this, he tries ordering the carpet back to the palace at once. But it doesn’t budge, throwing Abdullah into despair. There appears to be a secret code word that will “activate” the magic carpet, but since he does not know it, he is stuck.

Once he calms down a little, though, Abdullah reminds himself that the carpet definitely took him to the palace the previous night. Deciding that he must have mumbled the code word in his sleep, he asks the rug to transport him to Flower-in-the-Night as soon as he speaks the word in his sleep. Meanwhile, he waits anxiously for nightfall so he can go to bed and return to his princess.

The plan works, and Abdullah shows Flower-in-the-Night the pictures. She studies them all, especially the ones showing the most handsome specimens, then declares that none of them are as handsome as her midnight visitor. Confirming that she is now sure he is, in fact, a man, Abdullah falls to discussing marriage with her. As it turns out, Flower-in-the-Night is to be betrothed to the Prince of Ochinstan (the Rashpuht name for Ingary). Upset upon learning that it is common for men in Rashpuht to have more than one wife, Flower-in-the-Night declares that to be an unfair arrangement, especially when Abdullah says he thinks even the Prince of Ochinstan already has several wives. 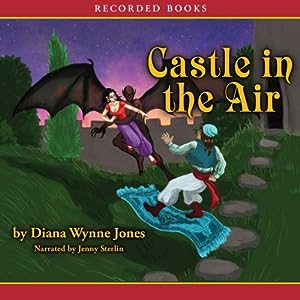 The discussion of marriage eventually brings the two to talk about their relationship. It isn’t long before they both decide to elope, and Abdullah begins to set the plan in motion. He narrowly escapes being married to his two fat cousins before the following nightfall. After selling off his stock and sewing the money into his clothes, he goes to sleep on the carpet.

Sometime later, he awakes in the garden. Flower-in-the-Night rushes out to meet him, and it looks like their fairy tale life together is about to begin…

…Until an enormous, dark djinn arrives and snatches up Flower-in-the-Night.

Things begin to pick up from here, but I won’t spoil the rest of the story for you, readers. Suffice it to say this novel is as good – if not better – than its predecessor. The humor is top notch, the characters are well drawn, and the story is executed beautifully. It is a great read.

But you don’t need to take my word for it. Pick up Castle in the Air and Howl’s Moving Castle at your earliest opportunity and read them for yourselves. You won’t regret it! 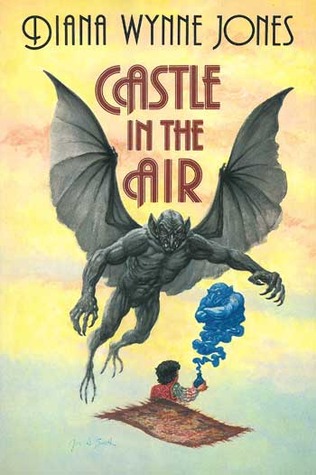