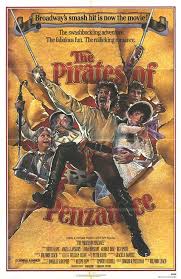 Years ago, I met a group practicing for a play. It was a Gilbert and Sullivan play, but I did not know that at the time. I enjoyed the singing and the lyrics, and one of the friends with me at the time said that I had to see The Pirates of Penzance.

I was more amenable to the idea than I might normally have been. There was something in the practice session that hinted at a great story worth seeing, and so I readily agreed to watch a film of the play.

A film copy of the play was found soon after. Starring Kevin Kline, Rex Smith, Linda Ronstadt, Angela Lansbury, George Rose, and several others, it promised to be a great deal of fun. And that, I soon discovered, was the understatement of the year. As the story started I began to smile. Within five minutes I was choking on giggles. In ten, I was laughing out loud.

For those of you who do not know, Gilbert and Sullivan were two playwrights who wrote comedies in the late nineteenth century. Both were knighted and neither of them could stand the other. They each had aspirations to be the greatest in their respective fields and this meant that neither of them wanted to write comedies, especially if it meant they had to work together all the time. This was in spite of the fact that they were making a veritable killing at this work. The weary duo ended their partnership some time before they died, to the dismay of their fans. Sullivan, who was the younger, died first.

The Pirates of Penzance is one of their best known plays, along with H. M. S. Pinafore and The Mikado. In Penzance we are introduced to a Pirate King (Kevin Kline) and his scurvy crew. The crew is having a celebration for their young apprentice, Frederic (Rex Smith), who turns twenty-two today and thus ends his indentured servitude to them. How did Frederic become indentured to a pirate gang?

It turns out that his nurse, Ruth (Angela Lansbury), misheard Frederic’s father when he gave her a commission. Frederic’s father wanted his son apprenticed to a pilot, but Ruth misheard him and thought he said pirate. So she accidentally indentured eight year old Frederic to the Pirate King’s crew!

Frederic does not hold this misunderstanding against Ruth – it is an easy mistake to make, after all. He has come to know the pirates aboard the ship over the years and likes them all individually. But the fact is that they are pirates, the scourge of the sea, the plague of merchantmen, the locusts of seaports. And so in a general way Frederic hates the pirates he grew up with as the vilest scum of the Earth. And in the abstract he cannot believe that he has been duty-bound to help them ply their terrible trade from the time he was eight years old.

The pirates do not hold this against him, though, since they cannot seem to “make piracy pay.” Frederic knows why this is; because they are orphans, the pirates give orphans a free pass. And word of this nobility on their part has gotten out. The last three ships they tried to take were all manned by orphans, so the pirates spared them.

If you are saying, “Yeah, right,” you would be correct. Frederic points out that everyone knows England does not recruit orphans to crew its merchantmen; they need men with families and titles to command the ships. But because the Pirates of Penzance are known to spare orphans, the crews for these ships pretended to be orphans in order to escape them.

Once the clock strikes noon, Frederic sets out from the pirate ship, taking Ruth with him. Ruth is an older lady by now, but she is the only woman Frederic has seen and known since he was eight. He expects to marry her, a prospect she very much likes, since otherwise she will die an old maid with no one to take care of her.

But on pulling up to an English beach, Frederic espies a group of girls his own age come to the waterside to have a little fun. Finding Ruth has lied to him about her age and beauty, he casts her off before going to see if one of these young ladies will marry him.

His attempt almost ends in disaster. But one of the girls, Mabel (Linda Ronstadt), appears on the scene before all hope is lost in the young man’s heart. It seems that she lagged behind the other girls and only caught up with them to hear Frederic’s entreaty for a wife. She tells him to “take her heart,” and he is quite happy to do so…

Then the Pirates show up, and the fun kicks into high gear!

There is another version of The Pirates of Penzance which is worth a viewing as well. This one was performed in New York with Patricia Routledge, the lead actress in the British sitcom Keeping Up Appearances, portraying Ruth. If you ever saw her as Hyacinth ‘Bucket’ Bouquet and thought she had a terrible voice, you will be surprised to hear her singing here. She pulled a fast one on those of us who watched Keeping Up Appearances, I can tell you!

Have fun with The Pirates of Penzance, readers!

We all need a laugh every once in a while. It literally adds years to our lives. The songs below are some of the funniest I have ever heard, so I am recommending them to you, readers. Here’s hoping you are rolling on the floor laughing by the time you finish this post!

The Truck Got Stuck – Corb Lund

Sittin’ Up with the Dead – Ray Stevens

The Unicorn – The Irish Rovers

Snoopy vs. The Red Baron – The Royal Guardsmen

The Lion Sleeps Tonight – The Tokens

The Witch Doctor – Alvin & The Chipmunks