‘Twas the night before Christmas, he lived all alone,

in a one bedroom house made of plaster and stone.

I had come down the chimney with presents to give,

and to see just who in this home did live.

I looked all about, a strange sight did I see,

no tinsel, no presents, not even a tree.

No stocking by mantle, just boots filled with sand,

and on the wall pictures of far distant lands.

With medals and badges, awards of all kinds,

For this house was different, so dark and so dreary,

the home of a soldier, now I could see clearly.

curled up on the floor in this one bedroom home.

The face was so gentle, the room in such disorder,

not how I pictured a United States soldier.

Was this the hero of whom I’d just read?

Curled up on a poncho, the floor for a bed?

I realized the families that I saw this night,

owed their lives to these soldiers who were willing to fight.

Soon round the world, children would play,

and grownups would celebrate a bright Christmas day.

They all enjoy freedom each month of the year,

because of the soldiers, like the one lying here.

I couldn’t help wondering how many lay alone,

on a cold Christmas eve in a land far from home.

The very thought brought a tear to my eye,

I dropped to my knees and started to cry.

The soldier awakened and I heard a rough voice,

“Santa don’t cry, this life is my choice;

I fight for freedom, I don’t ask for more,

my life is my god, my country, my corps.”

The soldier rolled over and soon drifted to sleep,

I couldn’t control it, I continued to weep.

I kept watch for hours, so silent and still,

and we both shivered from the cold evening’s chill.

I didn’t want to leave on that cold, dark, night,

this guardian of honor so willing to fight.

Then the soldier rolled over, with a voice soft and pure,

whispered, “Carry on Santa, it’s Christmas day, all is secure.”

One look at my watch, and I knew he was right.

“Merry Christmas my friend, and to all a good night.”

Hello, readers!  Here are some Christmas advertisements that will hopefully make you smile.  Some are old, some are new, but all are “merry and bright.”

Have a great Christmas!

This is My Wish

I have wanted to write a post about Rise of the Guardians since a few hours after I saw it. But nothing would come to me in a distinct way, and so I have let it lie for a while. However, with Easter approaching, I thought it best to get down to “tacks of brass,” as one character in this film put it. The post you are now reading is the result.

First and foremost, I love Rise of the Guardians. It is a GREAT film and, sadly, it was panned by the “critics.” (Why do the critics always seem to get it wrong?!? *Aggravated sigh.*)

Rise of the Guardians centers on Jack Frost, a boy who the Man in the Moon made a powerful winter specter. This is after he ended up at the bottom of an icy lake. As a winter spirit, Jack has the ability to cause snowstorms, blizzards, frosts and – best of all – SNOW DAYS!!!

Jack loves to have fun. A spirit with a mischievous, sometimes nasty sense of humor, Jack spends lots of his time with children. But unlike Santa Claus, the Easter Bunny, the Sandman, and the Tooth Fairy, no one believes that Jack actually exists. Jack can have all the fun he wants, but because no children believe in him, they cannot see him. People walk right through him every day.

Jack does not understand his life as a spirit. The Man in the Moon put him here, but Jack has no idea why. It makes him angry, sad, and frustrated. (This may explain the nasty bent to his sense of humor.)

In the modern day, Jack is recruited to join the Guardians of childhood. These Guardians are: North (Santa Claus), Sandman (or Sandy), the Easter Bunny (or ‘Bunny’ for short), and the Tooth Fairy (also called ‘Tooth’). They explain that the Man in the Moon has decided Jack should become a Guardian as well, which startles him. Jack has tried talking to the Man in the Moon on his own for years and come up empty. Now he learns that the Guardians apparently have had a direct line of communication with the “big guy” since year dot.

But the Guardians do not let Jack leave. They have a problem. (Well, two, actually…) One problem is Pitch Black, a.k.a. the Boogey Man. A powerful spirit of fear, Pitch has had no one believe in him since the Dark Ages, when the Man in the Moon first appointed the Guardians to watch over the children of the Earth and protect them from Pitch’s influence.

Two: Jack does not want to be a Guardian. He likes children just fine. It is the “bribing” children with gifts and goodies he does not want to get in on. He would also really like to avoid the deadlines and hard work North, Bunny, and Tooth put into their jobs. For some reason, he never realizes that Sandman has no such duties attached to his job. Then again, maybe Jack knew that but did not want to land himself in an argument he could not win by mentioning it.

Jack is drawn into the fight with Pitch despite his initial reluctance, and in the process he learns why the Man in the Moon made him a winter sprite – and why he has been chosen to be one of the Guardians of childhood.

I will try to keep the spoilers to a minimum for those of you who have not seen the film. This is going to be hard because the inspiration for this post is a piece of dialogue within the movie. After Jack is told that the Man in the Moon thinks he should be a Guardian, North takes him to his personal workshop and demands to know what Jack’s “center” is. What is it that makes Jack Frost – well, Jack Frost?

In the process, North explains that his “center” is wonder. He sees only the “wonder” in life, like “lights in the trees and in the air.” “This wonder is what I put into the world,” he adds, “and what I protect in children.”

The important part of this piece of dialogue is how North points out that he “puts” wonder into the world. We are all born for a purpose, which Chris Pine points out in the behind-the-scenes for the story. One of the main questions every human asks is “why am I here?” That is the question Jack has to wrestle with in the movie, and which we all have to figure out ourselves.

The fact is that we are called to put those things into the world, and more. But, of course, “many are called, few are chosen.” This is best exemplified by the film’s villain. Pitch Black may have been made a sprite by the Man in the Moon, too. We do not know this for sure, and the movie gives us no hints. However, if that is the case, then maybe Pitch was supposed to put something good into the world as well.

This is not how he uses his power, though. Pitch puts fear into the world not in order to help people but so that he can control them. He specifically mentions that he wielded a lot of power in the Dark Ages, prior to the arrival of the Guardians. Where he could use his ability to help people overcome or face their fears, if he wanted to, he instead uses his power to control them.

North, Tooth, Bunny, Sandman, and even Jack do not do this. They put things into the world to help other people, specifically children. North puts wonder into the world, while Bunny keeps hope alive for others. Tooth protects memories, the precious memories of childhood. Sandman protects dreams, the most powerful things in the world. Without dreams of aspiring to be better than we are, we will never get anywhere.

And Jack – well, explaining what he puts into the world would be telling. I am not going to do that. However, I am going to spoil a little something extra and explain why Jack is not seen by children until the end of the film. For all the time he has been a sprite, Jack Frost has used his powers to try and convince people that he exists. This does not work because Jack is using his power for his own gain.

At the end of the film, though, he uses his power to help the Guardians when they are at their weakest. That is when he becomes visible to children, for the first time since he was made a spirit. When Jack uses his power to help the other Guardians he becomes a Guardian as well. By using his powers for someone other than himself, Jack earns his heart’s desire: to be seen and loved by children. To no longer be alone.

Another great thing about the film is that it emphasizes the importance of children. This may be why the critics panned it. The Guardians are supposed to protect children because “they are all that we are, and all that we will ever be.” Too true.

If you have an opportunity to see Rise of the Guardians over Easter, I highly recommend it to you, readers! The film is actually set in the three days prior to and including Easter. It is definitely a good film for the season – even with all the snow in it! So, readers… 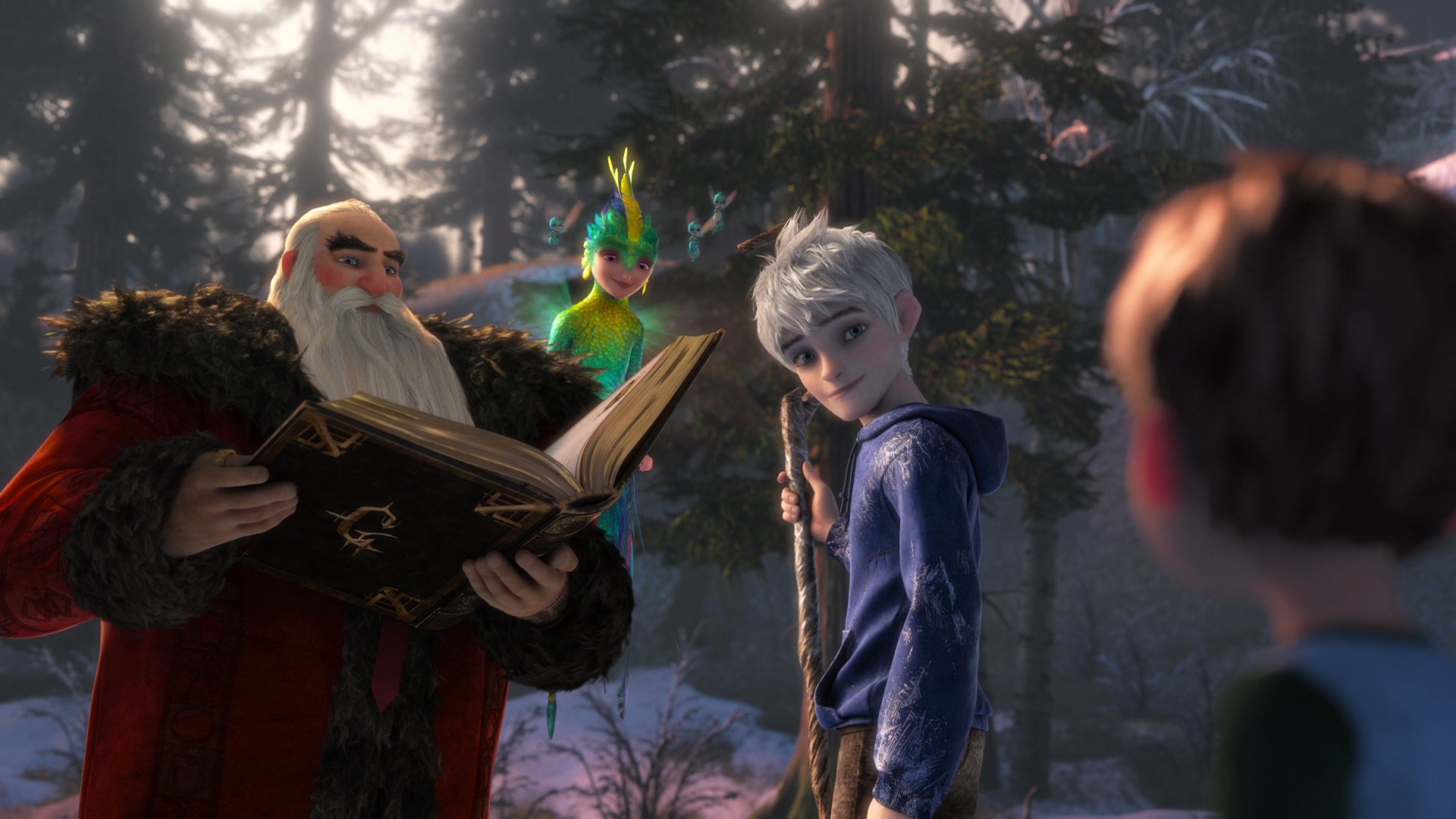