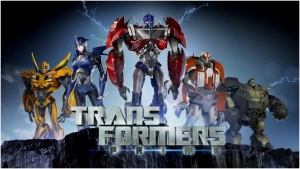 Some time ago there was a Transformers series on the air called Transformers Prime. The series concluded in 2013 and a new series is scheduled to take its place this year.

If you have read one of my past Transformers’ posts (“Why Are the Autobots Always Outnumbered?”) then you will know that I kept tabs on this series for the entirety of its run. One of the things that I found interesting in this Transformers series, as in previous Transformers stories, was the friendships that the Autobots established with the three young humans who discovered them in the first episode.

These three youths – Jack Darby (16), Miko Nakadai (15 – ish) and Rafael Esquivel (12 – and a quarter!) formed friendships with the Autobots Arcee, Bulkhead, and Bumblebee respectively. Rafael, or Raf, was the only human who could understand Bumblebee’s beeps and buzzes (in this series, our young Autobot warrior’s voice box had – again – been destroyed by Megatron). As the youngest of the three children, Raf naturally enjoyed the company of the youngest Autobot on Team Prime.

Meanwhile Bulkhead, a former construction ‘Bot who joined the Wreckers during the war, was given charge of the hyperactive, ever-adventurous (even at her own expense) Miko, a Japanese exchange student living in the U.S.   Bulkhead’s friendship with Miko bordered on the comic since, while all humans are delicate by Autobot standards, Bulkhead had to be even more careful than most when handling a human because of his huge size and weight. This caution usually made their friendship appear ironic; the great big Wrecker tiptoeing around his human charge, whose biggest delight was watching things get smashed, crunched, and all-around destroyed by the tremendous Autobot.

But the irony was mostly an illusion. He may have enjoyed building things once upon a time, but Bulkhead also enjoyed breaking things – as long as they were not Miko or things Ratchet needed in his work. Miko also found time to acquaint Bulkhead with heavy metal music, and the two enjoyed listening to it almost regularly.

The last human to be paired off with an Autobot was also, initially, the most reluctant, a sentiment his Autobot guardian at first shared completely. Arcee and Jack did not get along well for several episodes. In part, this was due to the fact that in the first episode of the series, Arcee’s close friend Cliffjumper was offed by Starscream. Seething with pain and fury, the last thing Arcee wanted at the time was to be assigned to human-watching duty.

Jack, meanwhile, had a tenth-rate job, a single mom who worried about him non-stop and a ten-speed bike when he would have preferred a motorcycle. The last thing in the universe that he wanted was to be drawn into an intergalactic battle between two alien, robotic races. But, thanks to taking the time to check out Arcee’s alternate motorcycle mode, that is exactly what he got.

This was the friendship that really piqued my interest in the series. Watching Arcee and Jack becoming friends through their particular interior injuries and side-by-side battles with the Decepticons led me to the conclusion that the Transformers writers were finally moving in to more appealing character waters. This idea was strengthened when Jack was later given the responsibility of restoring Optimus Prime’s memories; it seems that humans can possess enough “spark” to qualify as Primes in certain situations. This was something I was hoping that Transformers Prime would explore in-depth throughout its second and third seasons….

But instead the series focused more and more on the Autobots and their problems alone. While I sympathize with those who enjoy the Autobots as characters themselves and who find the humans in the series annoying, and though I understand that the writers had a fixed number of episodes in which to tell their story, the trimming down of the kids’ characters and relationships with the Autobots was very irksome for me. I had initially been fascinated by the series precisely because of the children’s friendships with their Autobot allies. Watching those friendships slowly becoming trivialized until they were cut out entirely was no fun.

Not to mention the fact that it would have been a lot more fun if more Autobots had joined the team on Earth. But the only new additions to the team’s roster were Wheeljack, Smokescreen, and Ultra Magnus (who came across as a real stiff rule-reader). Wheeljack came in with an interesting revamp to his back story; in Prime, he was a battle-tried Wrecker who enjoyed watching stuff blow up almost as much as Miko did. He never quite received the character time I would have liked to see him get, but what we viewers did see of him was pretty good.

The same cannot be said for Smokescreen – at least, not by me. Smokescreen would have been more tolerable if he had only been an eager Elite Guard cadet, but he had the added problem of being extremely self-confident. This lead to him landing in trouble on more than one occasion; in one event, he dragged Jack along for the ride, though Jack willingly went along with him. I was not pleased with that, either, since it ruined Jack’s character as portrayed from the beginning of the series. Jack was the most level-headed and Prime-like youth the Autobots had on their side. Watching him run off to do something terribly stupid at Smokescreen’s behest was not fun. Also, Smokescreen’s store of uber self-confidence lost its charm very quickly.

All the same, Transformers Prime remains a pretty solid series. It had its faults (as mentioned above), but every series will falter in certain respects and rise in others. Prime by and large treated its audience and characters with respect, and if parts of it got trimmed down as time went on, that is probably most attributable to the time frame the writers’ (or their bosses) set for themselves. They had a big story they wanted to tell and not as many episodes in which to tell it as well as they could have. That they accomplished what they have with the series is a fine achievement in itself. Let us hope the 2015 Transformers series does as well in its own way, too.