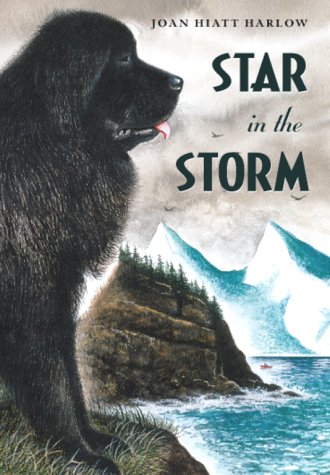 Wow, am I behind on my book reviews! Today’s novel is set in Newfoundland, or The Rock, as those who live there call it. You can see my review of another book set in the same place, and at roughly the same time, which I did last year here.

Star in the Storm focuses on Maggie Wells and her Newfoundland dog, Sirius. Newfoundland dogs, for those of you who don’t know, are big dogs with webbed paws and thick fur. Native to the island, they have been used by fishermen and to rescue swimmers caught in the ocean. They’re a very beautiful, loving breed and make great pets.

Today Maggie is out walking Sirius when she meets her cousin, Vera. The two go up to their secret hiding place, which is a cave in a cliff or quidnunc behind Maggie’s house. Here they have stashed mementos from earlier years, which they decide to air out this fine morning. While they are up there, wild dogs attack a herd of sheep being guarded by a different girl, Tamar Rand, in a meadow below. One of the sheep is chased off the cliff into the water and Sirius, wonderful Newfoundland dog that he is, goes after it.

Unfortunately, he is too late to do any good. The fall kills the sheep, which was about to yean. Tamar accuses Sirius of killing it and threatens to have the dog shot. None of Maggie’s or Vera’s factual defenses changes her perception of the event, and Tamar runs off to get her father to put the dog down. Luckily, Mr. Wells is able to talk Mr. Rand out of shooting Sirius, and things seem to calm down.

Key words being “seem to”; the Rand family manages to have a law passed that requires all dogs which aren’t used for sheepherding killed. Since the Wells have no sheep for their dog to herd, this puts Sirius’ life in jeopardy.

Determined to protect her beloved pet, Maggie hides Sirius in the same cave where she keeps her childhood valuables. But then a storm blows up, and a steamer crashes into the rocks in the bay. With a hundred passengers aboard who may die without help, Maggie has to make a choice: keep Sirius hidden, or send him out to help rescue the people trapped aboard the ship.

Harlow explains at the back of the book that the law was passed in real life, but it didn’t include Newfoundland dogs, which makes a lot of sense. Who would want to kill a Newf? The story about the steamer was also true, but adapted by the author to fit her particular tale.

While Star in the Storm is a children’s book, it is one of the better ones to come out in modern times. Though the writing isn’t excellent, it is good, and the story works well. If you want to learn more about The Rock, readers, Star in the Storm is an entertaining place to start. ‘Til next time!

That Fine Summer, by Ella Manuel, is a short children’s book set in Fox Cove, Newfoundland. Never heard of Newfoundland? I am not terribly surprised; The Rock, as her people call her, is not the most popular tourist destination in the world.

Newfoundland was discovered by Norsemen and colonized by them at the turn of the Dark Ages, if my memory serves me correctly. But it was not until after Christopher Columbus discovered America that a more permanent colony was set up. Over time English, Scottish, and Irish settlers came to Newfoundland to make their living on the bountiful cod, as well as the natural wealth of the rugged island itself. By the twentieth century, Newfoundland was its own island nation. I do not know the year, but Canada eventually annexed the island through Confederation.

I believe That Fine Summer is set before Confederation, back when Newfoundland was an independent country. In this short novel, Mahala “Malie” Jacobs marches out to her Grandfather’s house in a right fury. When asked what the matter is, she tells him that her mother has made her wear a new dress and a new set of shoes first thing in the morning.

Mahala is a tomboy who likes to go fishing and sailing, things she can only really do with her Grandfather. Her mother, her grandfather’s only child, wants Mahala to act and dress like a proper lady. The only things the two agree on are that they love each other, they love Grandfather, and they are ardent piano players.

That evening, Mahala’s mother springs another unwelcome surprise on her daughter. She tells Malie that they are going to St. John’s, the capitol city of Newfoundland, for the summer.

Malie is thunderstruck. She does not want to go to the city. She wants to stay in Fox Cove with her grandfather, fishing, exploring the beaches, and just having fun in her own native place. She has had it all planned out for the last few months.

This leads to an explosive family argument, and Malie goes to the person who understands her best to solve the dilemma: Grandfather. Grandfather talks to Mahala’s mother and convinces her to let Malie stay with him throughout the summer… That fine summer.

I’ll not spoil the rest of the book for you, readers. It is a sweet little story, with lots of local color and language. If you do not understand the Newfoundland slang, the BREAKWATER edition has a short glossary of Newfoundland expressions included in it. But between the jigs and the reels, the story should be easy for children to read and understand.

Have fun fishing for this book and learning about The Rock, readers!