I was bopping through the Wikipedia files on our favorite heroes when I remembered a character I’d seen in Avengers: Earth’s Mightiest Heroes!  So when I found the episode title and saw one name I didn’t recognize listed, I clicked on it.  That’s how I discovered Quake, a.k.a. Daisy Louise Johnson.

She’s very interesting; a SHIELD agent AND the daughter of a villain (in this case Mr. Hyde).  Adopted (and apparently raised) by S.H.I.E.L.D., she doesn’t seem to have any care for her actual father.  It’s safe to say he doesn’t care about her.

Beating Magneto on her first mission is a major accomplishment.  Too bad she didn’t join the Avengers; she’d make a heck of a teammate!  By the way, who are her adopted parents?  She seems to be so loyal to Fury that she considers him something of a father figure more than a commander.

From what I can see, she’s in good company.  Or at least, she should be.  After all, the Scarlet Witch and Quicksilver have a similar story to hers, but so far hers has turned out better.  And so this brings me to my questions, theories, and suggestions.

We’ll start with the questions: Why is she the only really good (recent) character related to a villain to turn into a permanent heroine?

And why don’t the heroes get to have families?

Wanda and Pietro have had repeated relapses into their criminal tendencies.  Nightcrawler has gotten along fairly well, but the same can’t be said of Rogue these days.  Gambit is also zigzagging across ‘state lines.’  Harry Osborn has fallen time and again into his father’s madness, and taken on the costume of the Green Goblin a few times in certain arcs and series as well.

The Prof’s son, David, turned into the villain Legion.  Cable – well, after a while it’s hard to tell which side of the tracks Nathaniel Summers fights on.  Spider-Man’s daughter is dead (I liked the kidnapped story better), and Mockingbird had a miscarriage at some point.  Yet Mr. Hyde, Thanos, and even the Red Skull each succeed in having a daughter.  Can you say ‘unfair’?

Now for my theories.  I think that you guys have Wanda, Pietro, Rogue, and Gambit ‘relapsing’ or going berserk to add pathos to their characters.

Excuse me?  All four are (or were) already trying to shake off the sins of their fathers (or mothers).  Gambit’s ‘father’ was a thief who raised him to use his powers to steal.  Rogue’s and Nightcrawler’s ‘mother’ regularly tries to kill them or ruin the world they live in.  And the Maximoff twins’ father is Magneto, a near genocidal mutant who has killed at least several hundred people.

This earns them plenty of sympathy and reason to run from their past.  The only one who seems to have succeeded, however, is Nightcrawler.

L Face it, sending them straight back into what they are desperately trying to avoid isn’t for the effect of extra tragedy.  It’s to ‘explore’ their psyches and ‘dark sides.’

For the umpteenth time; this is unnecessary!!  They suffer enough even being tied to these people.  Drowning them in their ‘dark sides’ is just to entertain yourselves (you sickos!!!!).

As for not giving anyone but the Fantastic Four and Luke Cage a stable family, I think you haven’t done that for two reasons.  First, you don’t believe the readers and fans want to see the heroes ‘grow up’ and have a family.  Second, you figure there’s no real need for them to have one except as a launch pad for a plot twist (which is why Hawkeye’s family died in the Ultimate Marvel Universe; how else could you make him a suicidal loose cannon?).

Did the relative popularity of the MC-2 universe Spider-Girl teach you nothing?  Obviously, it didn’t.  New York’s favorite Webhead finally gets a chance in that series to be as happy as Reed and Sue Richards, and fans liked it.  They liked it.  Yet our mainstream heroes get slung into the depths of despair and pain for no other reason than it is amusing to you.

So somehow villains like the Red Skull, Thanos, Magneto, and Mr. Hyde get to have children (two of whom, Sin and Nebula, take on the professions of their fathers), but only the FF gets to have a legacy in Franklin Richards and his new baby sister.  Even the Prof doesn’t get to have anyone take up his cause since Cyclops’ fall from grace.  I don’t know where Legion is, but he certainly isn’t a member of the X-Men.

Meanwhile, evil is assured root in the Marvel Universe by the likes of Sin and Nebula, while good wanes as fast as the might of Gondor.

As you may remember, that fictional country’s strength was reinvigorated by the return of the king. When I say this in relation to the comics, I mean the return of hope, common sense, and heroes to their principles once again.

If Spider-Girl was popular once, why couldn’t she be again?  I’m not saying that Spidey has to hang up his costume when/if he becomes a dad; when has Reed Richards?  When has Luke Cage?  Last time I checked, they were still actively serving as heroes after becoming fathers.

I have more examples beside the MC-2 Universe, too.  I haven’t forgotten the Next Avengers’ Universe with James Rogers, Francis Barton, Torunn, Azari, etc.  Fans enjoy those comics, don’t they?  When last I checked, they did.

Just out of curiosity, have you ever tried to find out why they are so liked?

If not, then here’s why I enjoy them: although all our heroes in the Next Avengers Universe are dead (sniffle), all is not lost.  For a while they had a little bit of happiness before they went to the great beyond.  They had children who would be able to continue their legacy.  And watching these youngsters grow up is almost like meeting our favorite heroes all over again.

Throughout their comics’ series, they have made nearly the same mistakes that their parents would have.  They get into similar disagreements or brawls the way their parents did (James and Francis continue to knock heads, as their fathers did before them, over how to win a fight).  They’ve been fostered by Iron Man, just like Myles in Men of Iron was fostered by a friend of his father’s.  This type of story is nearly as old as time.

So despite the fact that these true ‘Young Avengers’ are living in an apocalyptic world without their parents, the driving theme is that they are emblems of hope for their universe.  That’s why I like them.

Okay, so now that I’ve burned your ears off, are you ready to hear the suggestions I referred to earlier?

Well, ready or not, here they are.  Why not let our mainstream heroes wake up from this clockwise nightmare?  Suppose the stories from Disassembled and onward are somehow erased (permanently, please!) or are the result of some sort of ‘dream sequence.’  Then give the heroes a breather for as long as they need it; get them back on their feet, reorient them with each other and with the readers.  (I cannot tell you how old they feel right now, with this constant breakneck pace that’s been running through the comics for the past twenty years.  Giving them a breather would help, oh, so much.  It would take years off them if you just gently applied the brakes and started cruising down the street again.)

And then I would suggest that you let them have what the people they continually fight to protect have – a family.  I would suggest giving them heirs to carry on the mantle at some future time (preferably, a future time that is always one more day away).

Luke Cage is proof this works.  He’s a father and his daughter was kidnapped not too long ago.  They got her back, safe and sound.

Reed and Sue Richards are also proof.  How many times has Franklin been threatened since he was born?  I, for one, have lost track.

These two families are proof that being a family and being a superhero is possible.  A family wouldn’t make a hero ‘grow up,’ they would make them ‘grow out.’  In other words, they would expand their character.

Think of the plots that could come of this, fellow writers!!  Think of the new teams that could be formed this way!!  If there’s to be a band of Young Avengers, it should have at least one or two children of a few actual Avengers as members- in my humble opinion.

You could make Iron Lad (can that name get ‘ironed’ into better shape?) a son of Tony Stark instead of a young Kang the Conqueror.  That would make it less of a headache to keep up with an Iron Lad, as well as explaining how he got the armor.  Cap is definitely a family type guy.  You already know what I have to say about Mockingbird and Hawkeye.  Quicksilver has a daughter, as does Arachne/Julia Carter.  Where are these girls?  And T’Challa needs an heir or the kingship of Wakanda goes to a relation of his when he’s dead.  Storm would make a great mom; she proved it taking care of Shadowcat and other young mutants.

This is not to say I want our heroes abruptly and unceremoniously replaced by their children (if they have any).  All I’m asking is a hint that someday, a day that never really comes, our heroes will have heirs to take their places.  Kings and queens in old folklore had that.  Why can’t our heroes/heroines have that?

I realize that characters like the Hulk and the Black Widow can’t have children.  That’s fine.  Who in the world could replace the Hulk or Natasha Romanoff?  There are also characters I wouldn’t want to see married, let alone parents (I mean Ms. Marvel here; *shiver*).  But it would be nice to see some of the heroes, like Cap, Tony, Spidey, and Hawkeye, get the chance at that happiness.

Why, you ask?  Because the villains shouldn’t get all the perks.  For starters, they haven’t earned them.

I say – no, I shout – let the heroes go back to having rambling, surprising, fizzy adventures.  Adventures where the heroes are the good guys – period.  Reading stories like Disassembled and Age of Ultron makes me feel a thousand years old; that was never the purpose of our favorite heroes. And I suggest letting Quake, Rachel Carter, Franklin Richards, Nick Fury Jr., etc., have peers.

So this is my challenge to you, fellow writers.  Turn off the overheated engine, the blaring buzz of constant hate and warfare.  Give us some fizz, hope, and freedom.  Give us some expanded characters.

Are you up to it?

Mithril (A Frustrated, but Eager and Hopeful True Believer) 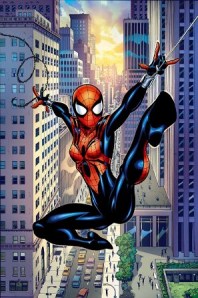