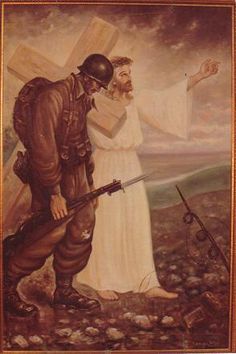 Prayer of a Soldier in France

By Joyce Kilmer
My shoulders ache beneath my pack
(Lie easier, Cross, upon His back).
–
I march with feet that burn and smart
(Tread, Holy Feet, upon my heart).
–
Men shout at me who may not speak
(They scourged Thy back and smote Thy cheek).
–
I may not lift a hand to clear
My eyes of salty drops that sear.
–
(Then shall my fickle soul forget
Thy agony of Bloody Sweat?)
–
My rifle hand is stiff and numb
(From Thy pierced palm red rivers come).
–
Lord, Thou didst suffer more for me
Than all the hosts of land and sea.
–
So let me render back again
This millionth of Thy gift. Amen. Secondhand Lions is a great movie starring Robert Duvall, Michael Caine, and Haley Joel Osment.  The film takes place mostly in the late fifties or early sixties.  Osment plays Walter, a young boy who lives with his mother.  Walter’s mother – Pearl – is a widow who is always on the move.  She has an unfortunate idea that she will be able to find a man who will have enough money to cure all her worries…. and Walter’s too, of course.

Pearl’s latest scheme involves leaving Walter with his two great uncles, Hub and Garth (Duvall and Caine), for the summer while she “goes to school.”  She is also hoping that Walter can somehow find his great-uncles’ money.  “They say they stole it,” his mother tells him conspiratorially.  “What do you think, Walter?  A real buried treasure, just like in all those books you’re always reading!”

And Hub and Garth can both shoot very well.  In fact, when Pearl and Walter find them, they are fishing in the lake on their property.  But they are doing it in the most unsportsmanlike manner imaginable.  Some professional fisherman would undoubtedly groan and cover their eyes at the sight of the two old men firing into the lake with their shot guns.  This is their idea of fishing.

Their idea of excitement and entertainment is even better.  Traveling salesmen have heard the rumors about the brothers’ fortune, and these guys can smell a dollar a mile away.  They are looking to collect a little of the loot for themselves through hocking the old men some brand spankin’ new merchandise.  Most of them only stay around to get shot at three or four times before packing up and speeding away.

While settling into his uncles’ house that night, Walter finds a trunk with different postage notes stamped on it.  Finding the key (conveniently) to the lock, he opens the chest to discover it is full of…. Sand?  Soooo disappointing!

Or is it?  Running his hand through the sand, Walter finds a picture of a beautiful young Arabian woman underneath the dust.  Uncle Hub is not much of a talker, but Garth is more willing to befriend Walter.  He tells the boy about how he and Hub toured Europe as World War I began, keeping just ahead of the Kaiser’s army.  On their last night in France, the two met a couple of fellas in a bar who got them stone drunk –

And the brothers woke up the next morning to find themselves on a ship, shanghaied into the French Foreign Legion in Africa!

Hub loved it.  He took care to watch out for Garth, naturally, but he loved the fighting.  He fought “with the strength of ten men.”

After the end of the war, Garth wanted a more tame occupation.  He led safaris for Hollywood types and rich people in Africa.  But Hub, he had to have something a little more exciting.  So he hired himself out to the new African governments to help put an end to the slave trade.  (FYI, they still have it today.)

It was after he rescued the handmaiden of a princess during one of these raids that Hub was to meet his future wife:  the princess Jasmine.

Living in the web of lies his mother has spun for him his whole life, Walter is thrilled by the stories Garth tells him.  But there is always a nagging fear in the back of his mind as he listens to these heart-pumping tales:  are they real?

At its core, Secondhand Lions is about the search we all pursue for the truth.  When at last Walter finally asks Hub if the stories are really true, did they really happen, Duvall’s character says, “It doesn’t matter.  What matters is what you believe….  And that love, true love, is the most real thing in the world.”

Secondhand Lions is one of the BEST films ever made.  Duvall’s Hub is perfect, just like all the roles I have seen him play.  Caine counterbalances Duvall well, both as an actor and in his portrayal of the supporting character/brother.  The older he gets, the more it seems that we see the real Michael Caine shining through the form of the character he plays.  Haley Joel Osment, a talented child actor, proves here that he can play beside the best and deliver a splendid performance.  He portrays Walter perfectly.

These three men make the movie great.  If you have not already seen Secondhand Lions, readers, do not wait another minute to borrow or buy it.  The film is well worth your time and your money.