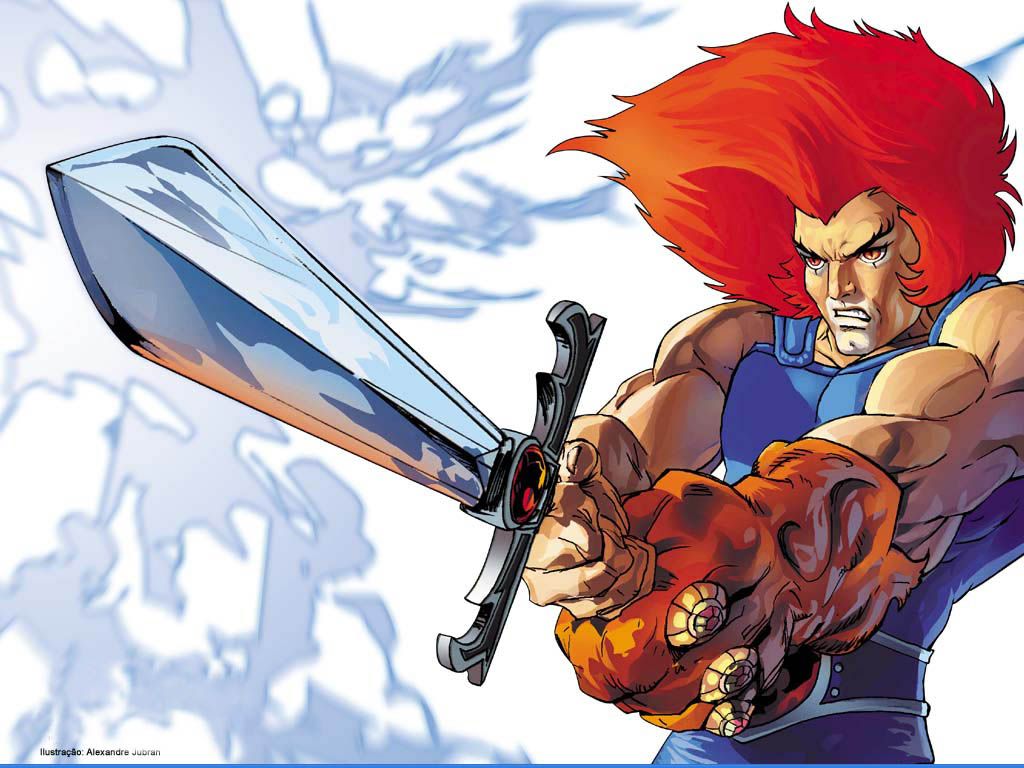 So far in this series of Spotlight! posts we have covered Panthro, Cheetara, Tygra, and the Thunderkittens. Discounting the one we will discuss today, that leaves one final character on the list. But who is the focus of this post?

…Tried it? It’s a bit of tongue twister, isn’t it?

When we first see him Lion-O appears as a twelve-year-old cub. As the rest of the team guides their ship away from Thundera, the young prince is quite literally taking a nap. Scenes from later episodes would make one wonder about this, but for the introductory installment the picture fits. The prince is a child and the adults want to spare him the destruction of his homeworld for as long as humanly possible. (Yes, I know they are humanoid cats. It’s called artistic license. Get over it!) Eventually, though, they have to wake him. If he is going to be the ruler of his people, he has to “learn to take the good with the bad.”

Not long after watching Thundera go the way of Krypton, the Thundercats’ ship is attacked and boarded by Mutants. Left in the throne room with the Sword of Omens, Lion-O is most displeased to be denied a piece of the action. However, when the Mutant leaders Slythe and Jackalman arrive to steal the Sword, Lion-O finds that battle does not necessarily hold the kind of excitement that he believed it would. Threatened by the Mutants, he tries to lift the Sword, but it is too heavy. So the Sword itself activates and, with a flare of magical power, sends Slythe and Jackalman running.

With the boarders repelled the adults take stock of the damage. Their engines have been hit hard, meaning they cannot reach their chosen new home, so their best option is the as-yet unnamed Third Earth. Since the journey will take so long the only way for the Cats to survive is to enter the suspension capsules, where they will be kept in suspended animation until they land.

If you read the first post on the original Thundercats series, then this should all be fairly familiar. The only reason I go over it again here is because it is a pretty good set-up for Lion-O’s character: he is proud, speaks before he thinks, and tends to get more than he bargained for when he makes any kind of childish wish. But we also see here that he does have redeeming qualities, such as nobility of spirit, courage, determination, and compassion. He is not a one-trick pony but a multi-dimensional protagonist who wants to be a good man.

So even though his behavior when he wakes to find himself an adult is annoying, it is not enough to make viewers like yours truly detest him. We have all been where he is at this point in his life and can relate to his attitude. Also, though we do not necessarily want him to get smacked upside the head with reality, we know it is coming. Because Lion-O remains agreeable despite his flaws, we can hope the blow is softened by the wisdom of his much older friends as well.

Lion-O’s character is more or less centered on nobility and courage, both virtues symbolized by his namesake cat. While he is second to Panthro in terms of physical strength, Lion-O is no slouch when it comes to corporal prowess. Those Conan-like muscles aren’t for show. When he gets going, the young Lord can go toe-to-toe with some of the most powerful villains on and off Third Earth strength for strength.

However, a good physique is not enough to fight Mumm-Ra. When he duels with the ever-living mummy Lion-O primarily relies on the hereditary weapon of his house, the Sword of Omens, to see him through the battle. More than a simple Sword, the mystical Eye of Thundera in the hilt of the Sword of Omens grants any pure and/or good-hearted wielder the basic ability of “Sight Beyond Sight.” This is the capacity to view people or events occuring simultaneously elsewhere and even in the past.

Whenever a Thundercat – up to and including Lion-O – is at risk or in danger, the Eye growls in warning. Lion-O could then snatch it from the scabbard/Claw Shield and say, “Sword of Omens, give me sight beyond sight,” enabling to see who was in trouble or what trap was in store for him. Given the context of this statement when spoken, his words always had the ring of a petition rather than a command. The Eye and the Sword were sacred relics to the Thunderian race, and given the power they had, his specific tone and phraseology when addressing the Sword makes a great deal of sense.

It also emphasized the fact that the Sword a personality of its own. Though willing enough to let Lion-O throw bolts of energy at an opponent or to use its magic in some other creative fashion, if he charged into a fight too quickly or let his pride get the better of him, the Sword would stay stubbornly silent, still, and small. This prevented Lion-O from becoming an intolerable protagonist as well. With the Sword and his friends checking his ego at every turn, it made learning lessons in humility and virtue easier for him to swallow, helping him grow up less harshly than he would have otherwise.

Along with the Sword, Lion-O regularly carried and wielded the Claw Shield. A scabbard that doubled as a gauntlet, it was molded to resemble a lion’s paw. The Shield was practically indestructible, just like the Sword. The index finger of the shield could send out a claw-tipped grappling line, allowing its wielder to swing down from a great height or swing up to one. The wearer could also use the lines to rappel up and/or down any vertical surface. The gems on its knuckles covered similar grappling lines, though they were used less frequently by Lion-O than the single claw line.

In addition, the gems on the back of the Claw Shield hid vents which would blow out clouds of a green smoke/gas which would temporarily blind and befuddle an opponent. The claws in the gauntlet’s “fingers” also allowed for a better grip when climbing, and a chain attached to the inside of the Shield gave the user the ability to wield the gauntlet like a lasso. It goes without saying that, when Lion-O punched someone while wearing the Shield, his strike hurt more than it would have if he had used his bare fist. If he hit someone with his Claw Shielded fist then the unlucky enemy would be feeling it for days.

It is unknown how the gauntlet attached to Lion-O’s leg. He wore no pants (as the pictures above clearly show), and there was no visible hook on the Shield. It adhered to his leg by some chemical or magical means, allowing the Lord of the Thundercats to grab and don it whenever the need arose.

Combined with the watchful instruction of his friends and the spiritual advice of the deceased royal adviser/magician, the influence of the Sword of Omens and Eye of Thundera helped to mold Lion-O into an heroic king. While not above a joke or friendly teasing, by the time he had to undergo the Anointment Trials to ascend the throne, the young Lord was almost a different person from the boy-child seen in the first episodes. Tempered by defeat and matured by time, he is an adult to be reckoned with, something his success in the Trials confirmed. 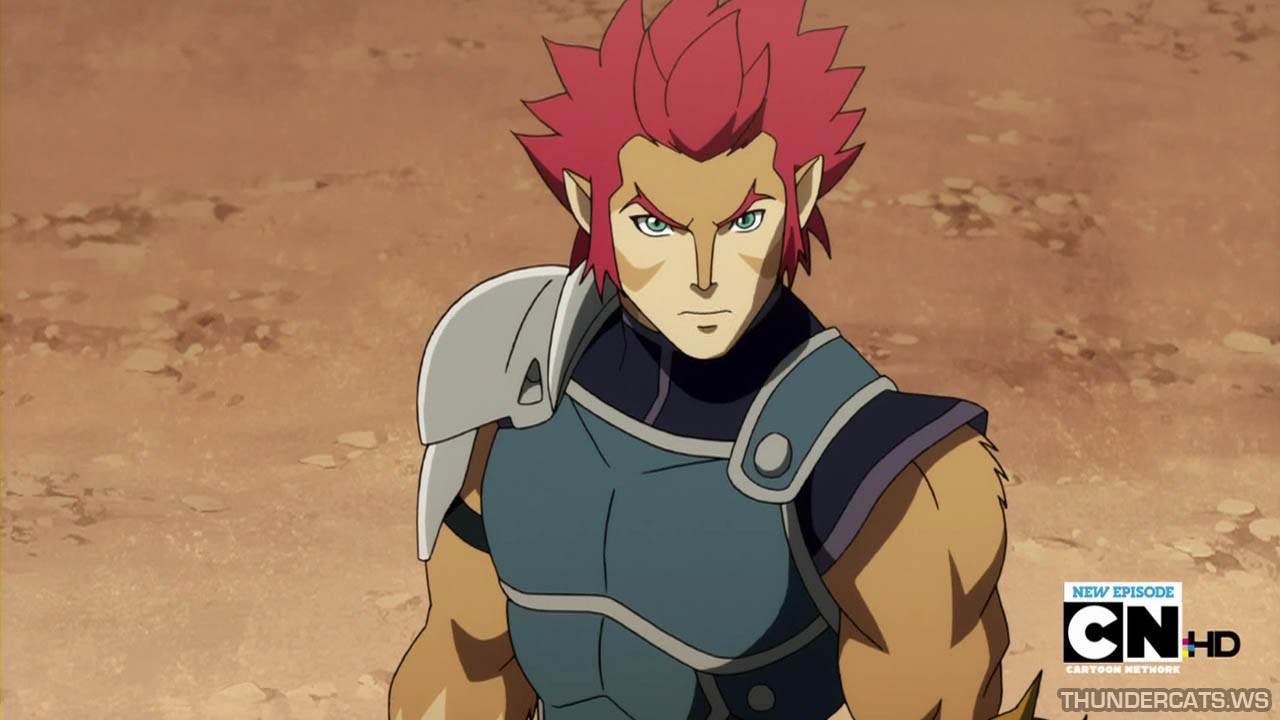 Of course, now one has to stack this portrayal up against that seen in the 2011 Thundercats reboot. To be perfectly honest, the writers for the reboot did a pretty good job of capturing Lion-O’s journey to manhood. They did not do it as well as the ‘80s writers, but that is to be expected due to the changes they made in order to win over a new audience.

In the 2011 series, Lion-O is in his mid-to-late teens. Somwhere around seventeen or eighteen based on his appearance, I would guess, but he may actually have been around sixteen years old. The heir to the throne of Thundera, which is a kingdom on Third Earth rather than a planet, Lion-O has lived most of his life in his adopted older brother Tygra’s shadow. He is therefore less mature and more likely to rush headfirst into a fight.

Only this time, he doesn’t want to charge into battle just to avenge wounded pride. That aspect comes later. Lion-O runs straight into trouble in the 2011 series because he is dedicated to doing the right thing, even if the odds are against him – a fact which usually registers after he has promised to fix everything, only to find the situation is more difficult or complex than it appeared at first glance.

For the most part, Lion-O’s pride is not a source of trouble in the reboot. His inexperience, his temper, his relative naïveté, and his good heart lead to most of the difficulties he and his friends face as the show progresses. Thus his journey is less about overcoming pride and realizing his responsibilities than it is about him transitioning through trial and error from boy to man.

Looking back, I think that this is one of the reasons why I did not mind Lion-O’s new appearance or arc in the reboot. His romantic interest in Cheetara and some other quibbles aside, the writers did a very good job of presenting the Lord of the Thundercats and his character arc to a new generation of viewers. While it would have been nice if they had maintained some of the nuance from the 1980s’, there is no denying that they pulled out all the stops to make sure they did not violate the pattern set for Lion-O by the first series.

Add to this Will Friedle’s enthusiastic voice acting (he happens to be a huge fan of the original Thundercats series), and there is literally nothing bad for this blogger say about his portrayal. He was a great choice for Lion-O, and I hope he gets another shot at playing the young prince someday in the future. This is one character/actor pairing that deserves to be revisited!

Well, that wraps up this year’s set of Spotlight! posts, readers. I have time for two more before I take my Christmas season leave, but I have many plans for 2020’s posting schedule. Many plans indeed…. ;D

Until next time: “Thunder…. Thunder….