Last year, two posts about a pair of Thundercats characters appeared here at Thoughts on the Edge of Forever. The first one focused on Panthro, the second on Cheetara. A commentor on the second Spotlight! post requested that his favorite Thundercat be discussed next, and this blogger promised to write about that character in the New Year.

Well, while it is a day late and a dollar short, I hope JorgePr finds this post to be a satisfying review of his favorite character. Today’s Spotlight! focuses on the intellectual member of the Thundercats, Tygra. The team’s architect, scientist, inventor, academic, and moral authority, Tygra often came off as bland or uninteresting to most viewers. While this is an understandable reaction early on, to maintain it is to miss the very important contributions this Cat made to the team and the series.

Although his role in combat was not often as spectacular as Cheetara, Panthro, or Lion-O’s were, Tygra was a capable fighter. Using his bolo whip, intelligence, and native strength, he could think circles around most of his opponents with ease. The fact that his whip granted him invisibility only added to his combat capabilities, as it allowed him to sneak up behind or otherwise catch enemies by surprise. From what we saw in the television series, the only problem with this power came when Tygra had to swim. Water – whether it had been specially treated or not – rendered him visible to the naked eye. So in that sense, water was his weakness, a fact we will come back to later. 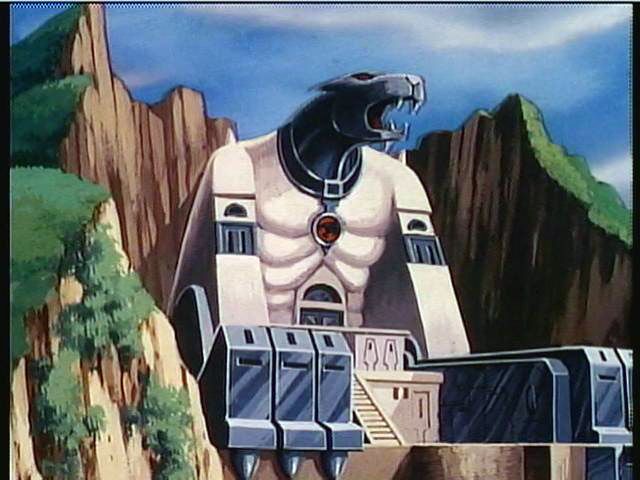 Cat’s Lair, as designed by Tygra in the original series.

Due to his architectual expertise, Tygra was the Cat the rest of the team turned to when they needed something built. The designer of Cat’s Lair, the Feliner, and the Tower of Omens, his skill with artistic construction extended to more mundane items and sciences as well. When the Cats were shrunken to the size of insects, Tygra was the one who formulated the antidote. He was also the designer of the recording devices the group later employed to video themselves and their world for posterity. So while he wasn’t as mechanically inclined as Panthro, no one could say he wasn’t a good machinist, either.

Tygra also acted as the arbiter, recorder, and voice of final authority among the adult Thundercats. This was a position he achieved based on the virtues built into his character from the beginning. Clearly designed to resemble the tiger, where Panthro and Cheetara’s personalities were influenced by their physical attributes (strength and speed) his qualities had a different inspiration: the virtue of integrity.

Out of all the Cats, Tygra was probably the one with the strongest attachment to the Code of Thundera. While the others kept it in mind and allowed it to influence their daily lives and decisions, Tygra practically exuded a balanced spirit infused with Justice, Truth, Honor, and Loyalty. More than once, he cited or leaned on the Code to remind the rest of the group of their duties to the denizens of Third Earth or to emphasize the vital need for them to remember, honor, and adhere to their culture and beliefs.

Loyalty was probably his most obvious trait. Though he wasn’t afraid to call Lion-O or any of others to the carpet when they were drifting off course, he always did so in a way that was respectful and/or deferential. He was, after all, not rebelling against his Lord or his friends but trying to make sure they corrected their course before it was too late. Despite his vulnerability to mind-control, in the end Tygra’s devotion to the Code and his friends always won out over the evil influences.

This brings us back to Tygra’s powers and limits. Besides his bolo whip, Tygra possessed a hereditary trait called “mind power.” This ability played a clear role in only one episode, where Lion-O had to undergo a series of challenges to earn the title of Lord of the Thundercats. However, small hints dropped throughout the series suggest that this psychic talent was one he used in minor ways on an almost daily basis.

From a noble House renowned for its talent with “mind power,” Tygra often had to rest and prepare for days before using his psychic abilities for anything major, such as the trial where he tested Lion-O by casting various mental illusions. Unlike Cheetara, Tygra was well trained in the use of his gift. He therefore could not receive psychic images, warnings, etc. the way that she could. This may have made him susceptible to subtle psychic manipulation since, on three separate occasions.

Each time Tygra was lured into betraying the Thundercats and/or himself. In two of these cases, though, he managed to overcome the perpetrator’s influence and return to normal. Due to his heritage and calm, controlled demeanor, it only makes sense that he was taught from a young age how to defend against telepathic intrusion at the same time he learned how to use his power to protect himself. This implies that he learned to specifically guard against or block explicit telepathic messages or attacks, making it harder for him to realize when he was being presented with a less forceful psychic lure.

I say this last because, in an entirely different event, he showed he could recognize and fight overt psychic attacks. When Mumm-Ra used special bracelets to put the Cats under his mental command, Tygra was the last Cat standing, having ordered Snarf away to find and warn Lion-O. Eventually overpowered, Tygra was able to resist the bracelet and Mumm-Ra’s influence for a short period of time, something neither the Thunderkittens nor Cheetara had been able to do when they were “captured.”

To this blogger, that implies that his psychic talent made spontaneous use or abuse of it difficult in the extreme. Where Cheetara’s sixth sense could not be trained or used regularly, Tygra’s ability could, allowing him to block explicit or open telepathic messages without really thinking about it. It is also possible that while he needed to rest up and conserve energy to use his “mind power” for big events, using it for minor tricks in combat took little to no effort. In the first episode of the series, Tygra appeared to vanish – without using his brand new bolo whip to do so. It appears, therefore, that he could and would occasionally use his power to make others believe he had disappeared without resorting to his main weapon during skirmishes. 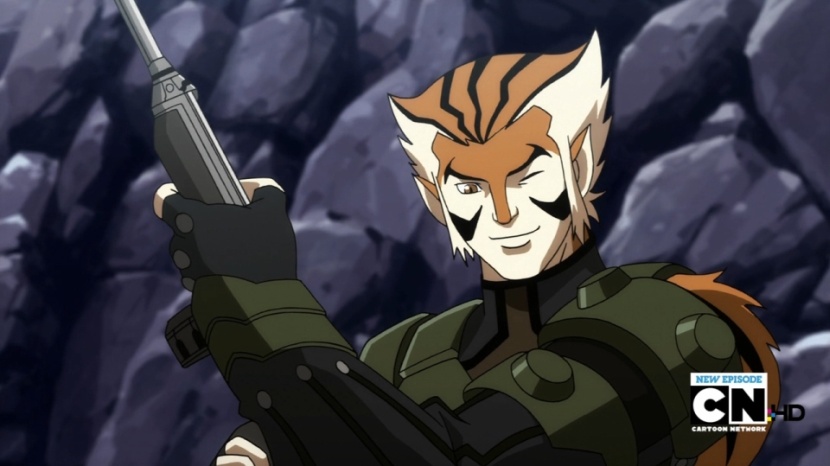 Clearly, although he is not my favorite Thundercat, I have an immense respect for Tygra. Or at least, I respect his original depiction in the 1980s cartoon. I am also happy that the comic book writers married him off to Cheetara in their book series. The 2011 reboot’s giving us a good picture of their relationship and his origin story were well done additions to his character as well. (Except for the implication that he was the last tiger on Third Earth. Come on, people!)

As for the rest of the reboot’s presentation of Tygra, there were some glaring problems – starting with the small fact that they made him seasick. The original series never made it perfectly obvious, but it didn’t take a genius to come up with the theory that water was Tygra’s Achilles’ heel because it made him visible. Reducing this vulnerability to a queasy stomach was one of the ways they chipped away at his character in the reboot.

Unfortunately, it didn’t stop there. While his status as Lion-O’s adopted brother was good, along with his more confident air, the resulting rivalry between them – especially where it concerned Cheetara – was absolutely unnecessary. It only got worse from there, as the writers used Tygra to make silly jokes that did nothing to make the stories they told any better than they already were. In fact, the debased treatment of this great Cat was a demerit for the final half of the 2011 reboot, in this blogger’s opinion. They wasted both the story lines they had set in motion and, worse, the rich estate they had received from the original Thundercats series.

In an effort to make him more interesting, the writers tore his most powerful characteristic – integrity – from him. They didn’t respect his honesty or his loyalty, though they tried to show the latter on occasion. Most of this was due to the fact that the reboot never referenced the Code of Thundera at all. It reduced the fantastic, chivalrous society which held its nobles and itself to a high set of standards and made it like the writers’ conception of the modern world, only with fantasy trappings.

This isn’t to bad mouth the good things they did do in Thundercats 2011. While I have my issues with the series, it did have its moments. And since it gave Tygra some great/good scenes while adding to his story, the writers deserve credit for doing their best. I only wish they had done better – especially where Tygra was concerned.

Hopefully, a future series (and no, I am not counting “Soycats” as a new Thundercats series), will treat the franchise and Tygra better. Only time will tell. Until then, I highly recommend watching the original series. The first half of the 2011 reboot is also watchable – though if you do it with a fan of the original series, be ready to hear some complaining. While this blogger dislikes the latter series, it does have some good material in it. You just have to have the patience to find it.

Until next time, readers, I leave you with a hearty, “Thunder – Thunder…